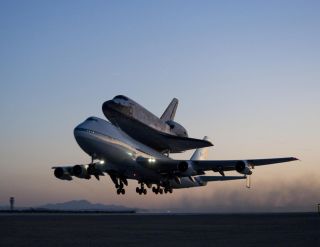 Space shuttle Discovery and its modified 747 carrier aircraft lift off from Edwards Air Force Base early in the morning of Sept. 20, 2009 on the first leg of its ferry flight back to the Kennedy Space Center in Florida.
(Image: © NASA/Tony Landis)

The spaceshuttle Discovery began a cross-country ferry flight to its home port in FloridaSunday more than a week after returning to Earth from its latest mission toorbit.

Discoverytook off from Edwards Air Force Base in California at 9:20a.m. EDT (1420 GMT) while riding piggyback atop a modified 747 jumbo jet, NASA?s Shuttle Carrier Aircraft, and made an afternoon pit stop at Rick Husband InternationalAirport in Amarillo, Texas, to refuel, NASA officials said.

The shuttle and carrier craft flew to Ft. Worth Naval Station in Texas to refuel again beforestopping over at Barksdale Air Force Base in Shreveport, La. If all goes well,Discovery should return home to NASA?s Kennedy Space Center in Florida onMonday.

Discoverylanded at Edwards Air Force Base on Sept. 11 to end a 14-day mission thatdeliver 8 tons of supplies and equipment to the International Space Station.The shuttle?s seven-astronautcrew performed three spacewalks during the flight before landing at abackup runway in California due to bad weather at the Kennedy Space Center.

Discovery?sferry flight back to the Kennedy Space Center was delayed by two days due tobad weather along its cross-country route. NASA typically spends about $1.8million and a week of time hauling shuttles home to Florida from California,but the trips depend heavily on good weather conditions.

?We flyrelatively low and slowly, so you don?t want a lot of wind and turbulence,?NASA spokesperson Allard Beutel told SPACE.com before Discovery?s trip homebegan. ?You?ve got a very delicate balance with the shuttle on top of a 747.?