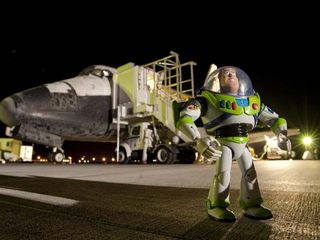 Buzz Lightyear in front of the Space Shuttle Discovery after his record 468 days in space.
(Image: © NASA)

Buzz Lightyear has been about as close to infinity as he'll ever get, and he's back. The "Toy Story" character will get a ticker tape parade at Walt Disney World in Florida Oct. 2 to celebrate his record-setting 468 days in space.

The longest stretch in space previously was in 1995 by Russian cosmonaut Valery Polyakov, who Buzz just bested by a month.

The 12-inch tall Buzz (who no doubt thinks he's the only Buzz) headed to the International Space Station last year aboard Discovery's STS-124 mission in joint educational effort by NASA and Disney. He returned Sept. 11, aboard space shuttle Discovery's STS-128 mission after his 15 months aboard the orbiting outpost.

Buzz will be joined by another Buzz – Aldrin – and space station crewmates for the celebration in Florida.

While in space, Buzz Lightyear helped develop educational videos aimed at kids. Following his return, Disney is partnering with NASA to create a new online educational game and an online mission patch competition for school kids across America. NASA will fly the winning patch in space.

Buzz had to get back because he, Woody and the others need to finish "Toy Story 3," which opens next summer.

At the parade, NASA plans to announce details of a new educational competition that will give students the chance to design an experiment for the astronauts on the space station.