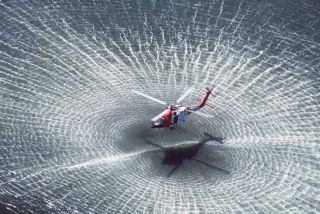 Anyone whohas ever needed an emergency medical flight or has been rescued by the U.S.Coast Guard will tell you the most wonderful thing about aviation is its usefulnessin saving lives.

Million of peoplethroughout the world owe their lives to the skill and dedication of pilots andspecialist crewmembers who operate search and rescue (SAR) and ?life flight?missions.

Often thesehighly skilled personnel operate in very difficult conditions. Just days ago aU.S. Coast Guard helicopter hovered a few feet above a narrow, rocky ledge7,000 feet up a snow-covered mountain while an aviation survival technician(AST) winched down to harness a badly injured climber so he could be safelybrought onboard.

Operatingto and from small helipads in dense urban areas and often called to fly toremote sites inaccessible to ground transport, the pilots flying life-flight helicoptersand the highly trained medical staff onboard must stay cool under extremepressure.

Thehelicopters that operate short-distance life flights must be large enough tocarry the patient on a gurney, as well as a medical team of two or more peopleand any medical equipment needed to keep the patient alive. The helicoptersmost favored by life-flight operators in the United States are manufactured byMD Helicopters, Eurocopter, Bell Helicopter Textron, Agusta Westland andSikorsky.

AAMS boastssome 270 life-flight operators as members. Most are U.S. operators, but AAMS hasmembers based internationally in Canada, Europe and elsewhere. Several membersare based in New Zealand.

Many peopledon?t realize that some 70 percent of the life flights that emergency medicalhelicopters perform in the United States are actually made between medicalfacilities rather than to transport people from accident sites or from remotelocations, said Beggan.

In manycases flights transport critically ill or injured people from hospitalemergency rooms to more specialized trauma centers where they can immediatelyreceive the specific lifesaving care they need.

Emergencymedical helicopters also often transfer organs urgently required for transplantor blood immediately needed for transfusion. But most life flights are made tosave the lives of patients who have suffered heart attacks or strokes or whohave suffered major trauma injuries in events such as automobile accidents.

Althoughindividual hospitals and group hospital operators own a significant proportionof the U.S. life-flight fleet, nowadays ?probably 60 percent? of the helicopteroperators are independently owned, said Beggan. Some of these companies employtheir own medical teams, though others rely on client hospitals to providelife-flight medical staff.

Many AAMSmember operators base aircraft at several different sites.

Best-knownof all of the United States? aerial saviors are the crews of the 144 SARhelicopters and 53 fixed-wing surveillance aircraft operated by the U.S. Coast Guard.

Oftenoperating in appalling weather conditions, these dedicated crews contributesignificantly to an astonishing lifesaving record that sees the USCG respondingevery year to some 60,000 emergency calls at sea and in remote U.S land areas tosave nearly 5,000 lives.

In thetwo-week period during and immediately after Hurricane Katrina in September2005, the U.S. Coast Guard saved more than 33,000 lives along the Gulf Coast.

It stationsSAR helicopters and crews on its ships and at facilities on the East, West andGulf coasts of the United States; in Alaska, Hawaii, Guam and Puerto Rico; andon the Great Lakes and inland U.S. waterways.

Thousandsof people in the United States also give thanks to the private pilots of the AirCharity Network?s Angel Flight wings, who give their time and use theiraircraft to help others in great need.

Selectingmissions from the chapter?s online mission board, Richison tries to operate atleast one Angel Flight a month. He flies each mission at his own expense exceptfor his Cirrus SR22 aircraft?s direct operating costs, which the organizationreimburses. Others fly even more.