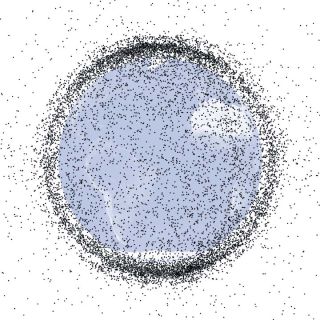 It's not as bad as it looks, NASA says.

New images depict man-made objects bigger than 4 inches (10 cm) orbiting Earth, and there are a bunch of them -- some 19,000 by the latest count.

NASA released the illustrated representations of space junk today based on the latest data and analysis from the U.S. Space Surveillance Network and the space agency's Orbital Debris Program Office.

As with previous depictions, it looks like a mess. But in a statement, NASA said the situation is not as dire as it may appear, even though each year brings more flotsam into the mix.

"The dots are not to scale, and space is a very big place," the statement reads. "Collisions between large objects are fairly rare. The orbit of each piece is well known. If any debris comes into the path of an operating NASA satellite, flight controllers will maneuver the satellite out of harm’s way."

Just this week, space shuttle Discovery was forced to dodge a piece of orbital trash as its astronaut crew prepared to come home. Also this week, a piece of Chinese satellite debris was expected to pass by the space station twice early Wednesday, but never came anywhere near the orbiting laboratory. Last week, a massive chunk of a 3-year-old European rocket buzzed the space station while the shuttle was docked there, zipping past about 1.3 miles (3 km) ahead of the station; it posed zero risk of impact, Mission Control said.

And as of May 2009, satellites in NASA’s Earth Observing System had been maneuvered three times to avoid orbital debris.

But collisions do happen, and they make matters worse, scattering fresh plumes of debris into orbit.

On Feb. 11 this year, a U.S. communications satellite owned by the private company Iridium collided with a non-functioning Russian satellite. The collision destroyed both satellites and created a field of debris that endangers other orbiting satellites, NASA states.

The risk is well recognized by the agency.

"The threat posed by orbital debris to the reliable operation of space systems will continue to grow unless the sources of space debris are brought under control," NASA's chief orbital debris scientist Nicholas Johnson told the House Space and Aeronautics Subcommittee in Washington, D.C. in April.