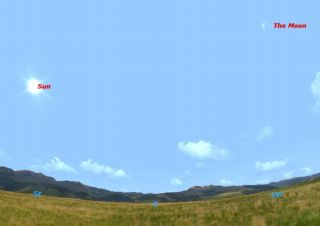 At 10 o'clock Saturday morning, your local time, both the sun and the moon are riding high in a clear blue sky. How can this be?
(Image: © Starry Night Software)

Any clear morning this week around 10 a.m. you can see the moon riding high in the western sky. Many people are surprised to see the moon in full daylight, yet it is a completely normal occurrence.

A very common misconception in astronomy is that the moon is directly opposite the sun in the sky. In fact, the moon is only in this position for a single instant in the whole lunar month: the exact time of full moon, when it is 180 degrees away from the sun. The rest of the month it can be anywhere from 0 to180 degrees away and, at least in theory, visible in the daytime sky.

At full moon, the moon is exactly opposite the sun. This means that the moon rises just as the sun is setting, and sets just as the sun is rising. This is also the only night in the month when a lunar eclipse can happen. Even so, eclipses normally happen only one full moon out of every six; the other times the Earth's shadow is either too high or too low to touch the moon.

Two things contribute to the moon being visible in daylight. First, it is bright enough that its light penetrates the scattered blue light of the sky. If you're looking at exactly the right spot with a telescope, you can also see the planets Mercury, Venus, and Jupiter in daylight, plus a few of the brightest stars (though few casual observers can actually pull this off). Secondly, the moon must be high enough in the sky to be visible.

Because of the Earth's rotation, the moon is above the horizon roughly 12 hours out of every 24. Since those 12 hours almost never coincide with the roughly 12 hours of daylight in every 24 hours, the possible window for observing the moon in daylight averages about 6 hours a day.

That's the situation this week. Last quarter is on Saturday, Sept. 12. If we set Starry Night software to that date, and its location to New York, we see that the moon rises at 11:06 p.m. the night before. The sun rises at 6:34 a.m., at which time the moon is 74 degrees above the horizon, almost overhead. Sun and moon will both be above the horizon until the moon sets at 3:03 p.m., although the moon will be hard to see for the last hour or so because of horizon haze.

Similarly, the moon will be well placed for daytime observation near first quarter, which next falls on Saturday, Sept. 26. The difference here is that the sun will be leading the moon, setting at 6:46 p.m., followed by moonset at 12:06 a.m.

Once you've seen the daylight moon on these "easy" dates, it's worth trying to see how many days in the month you can manage to spot it.