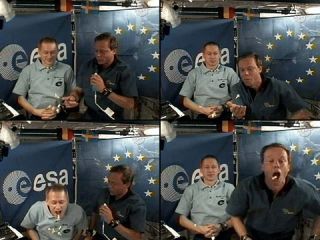 Beforeboarding a space shuttle to leave the International Space Station, Swedishastronaut Christer Fuglesang shared how "sweet" a spacecraft theorbiter could be.

"Frank is missing Belgian food, but I have some Swedish candy foryou," reportedFuglesang in Swedish. "These Swedish race cars floating around inspace."

Fuglesangreferred to the Scandinavian shuttles as "race cars" because of theirheritage. The gummy candies are popular in Sweden but not as spacecraft:marketed as "Ahlgrens bilar" ("Ahlgren's Cars") themarshmallow-like but chewier sweets are usually found in the form of cars. Infact, they are promoted as "the world's most sold car" by the LeafCandy Company, which bought the Swedish confectionery Ahlgrens in 1993, 40years after the cars' introduction on store shelves.

The company learned earlier this year that the pink, white and green cars werea favorite of Fuglesang's and after being approached to provide some for hisspaceflight, decided to do something special.

"They even made special edition, which is not cars, but they are in theshape of the shuttles," Fuglesang said in a prelaunch interview with collectSPACE.com. "So wewill have candy shuttles to enjoy in space."

According to Swedish media reports, Leaf produced just 100 bags of the Ahlgrensshuttles, and 33 were given to Fuglesang. In his pre-flight blog, Fuglesangsaid he gave the candies to NASA's foodlab to prepare for flight, along with other Swedish foods.

Each of theAhlgrens bilar bags were labeled as limited to 100 and included the Swedishphrase "Nu i rymden", or "Now in space". An illustration onthe label depicts three cartoon versions of the gummy cars aboard athree-finned rocket.

The Leaf Candy Company is not selling the shuttle edition and doesn't plan tomake any more. Many of the leftover 67 packages were given to Swedish media andbloggers, who in turn awarded the packages to their readers.

The STS-128mission, now in its 11th day, is Fuglesang's second space flight. The firstSwede in space, he made two spacewalks earlier in the mission and, added to hisprevious three in 2006, he has set the record for the most outings into thevacuum of space by any astronaut of a nationality other than American or Russian.

Fuglesang, along with his six STS-128 crewmates were scheduled to bid farewellto De Winne and his five station crew mates tonight, closing the hatchesbetween space shuttle Discovery and the orbiting outpost in preparation for undockingtomorrow. Discovery is set to land back on Earth on Sept. 10, weatherpermitting.