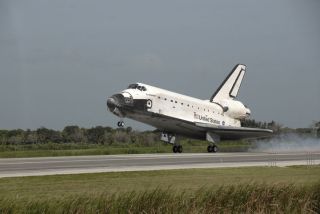 Space shuttle Endeavour kicks up dust as it touches down on Runway 15 at NASA's Kennedy Space Center in Florida on July 31, 2009 to complete the 16-day, 6.5-million mile journey on the STS-127 mission to the International Space Station.
(Image: © NASA/Kim Shiflett)

He may be abit wobbly for a bit, but Japanese astronaut Koichi Wakata is feeling fineafter returning to Earth for the first time in more than four months tocomplete his country?s first long-duration spaceflight. ?

?I feelgreat,? Wakata told reporters after landingin Florida aboard NASA?s space shuttle Endeavour. ?When the hatch opened, Icould smell the grass and the ground and I?m glad to be back home.?

Wakata andsix other astronauts landed at 10:48 a.m. EDT (1448 GMT) Friday when Endeavourtouched down at NASA?s Kennedy Space Center in Florida. The shuttle astronauts wrappedup a long, 16-day mission to the International Space Station, but Wakata returned home after livingin weightlessness for 138 days.

?Stillfeeling a little bit shaky when I walk, but feeling very good,? said Wakata, lookingvery stable in a post-landing conference.

A host ofmedical checks prevented Wakata from grabbing a bite of sushi, which he has beencraving since leaving Earth and was waiting for him a-plenty. He planned tochow down later Friday after speaking with reporters.

He alsoreturned one day before his 46th birthday, which is tomorrow. He expects tocelebrate with his wife and young son, possibly over more sushi and a birthdaycake.

Wakatalaunched to the space station back in March and served as a flight engineer onthree different crews including the first full six-personcrew, which he left when his replacement - NASA astronaut Tim Kopra -arrived earlier this month aboard Endeavour. He is Japan?s first long-termresident of the space station, was among the first station astronauts to drinkwater recycled from urine and wore high-tech clothing developed by the JapanAerospace Exploration Agency (JAXA).

?He reallycompleted his duty and his mission,? said JAXA President Keiji Tachikawa, whomet with Wakata just after he landed.

DuringEndeavour?s marathon mission, Wakata and his crewmates installed the finalpiece of Japan?s giantKibo laboratory, a $1 billion facility made up of a module the size of atour bus, a small storage room and an external porch to hold experiments. Itwas the new porch that Endeavour astronauts installed during their mission, whichincluded five spacewalks to add the piece, deliver spare parts and replacevital solar array batteries.

?We arethrilled to be here capping off a really successful mission,? Polansky said.

Endeavour?ssix-man, one-woman crew boosted the space station?s population to 13 - its largest crowdever - when the shuttle arrived. They were also in space during NASA?s 40thanniversary of the first manned moon landing.

The extrapeople meant that some things that would be mundane on Earth, like a floodedtoilet, became urgent problems.

Theadditional people also helped the space station live up to its internationalnamesake.

Endeavour?s crew included Canadian astronaut Julie Payette, withanother Canadian living aboard the station alongside two Americans, twoRussians and a Belgian astronaut. The United States, Russian, Canada, Japan andEurope - all five of the major space agencies building the $100 billion station- were represented while Wakata was aboard.

?Everymission has its own character and they?re all amazing,? said astronaut DaveWolf, who has flown on shuttle missions to the International Space Station andserved a months-long stint on Russia?s space station Mir.

?Seeing thespace station come together, an international orbiting laboratory conductingresearch that can?t be done on Earth, this really, essentially topped them all,?Wolf said.

With Endeavourback on Earth, NASA is now turning its attention toward the next shuttlemission aboard Discovery, which is slated to launch Aug. 25 to deliver spareparts and supplies to the space station.

Japan,meanwhile, is gearing up for the maiden flight of its H-2 Transfer Vehicle, anunmanned cargo ship slated to make its debut supply run to the space station inSeptember. NASA plans to launch seven more shuttle missions to complete the space station's contruction.