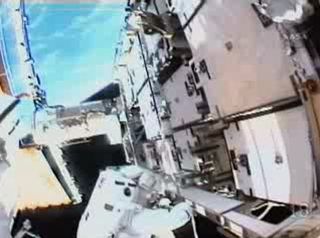 Twodetermined astronauts added a fresh set of vital batteries on the InternationalSpace Station Friday during an extra-long spacewalk made more so by the need totake things slow and steady.

SpacewalkersChris Cassidy and Tom Marshburn spent more than seven hours replacing fourbatteries at the core of the space station?s oldestsolar arrays, which sit at the very edge of the outpost?s left side.

It was thefirst spacewalk since a Wednesday excursion that was cut short by elevatedcarbon dioxide levels in Cassidy?s spacesuit. In that spacewalk, Cassidyapparently worked so hard at the start that he dried out the preciousair-scrubbing canister used to clean his air.

At no pointin that spacewalk was Cassidyin danger, but Mission Control urged that he and Marshburn take things slowly duringFriday?s orbital work.

Flightcontrollers also gave periodic updates on the astronauts? spacesuit performanceduring the spacewalk. Late into the orbital work, Mission Control noticedCassidy?s carbon dioxide levels were again rising slightly but he was not in anydanger.

Despite their deliberately steady pace, Cassidy and Marshburn sped through theirbattery replacement work at the left edge of the spacestation?s main truss. The station?s truss serves as its backbone and is aslong as an American football field.

?You guysare going so fast that we?re having a hard time keeping up here,? Kopra said.

There arefour sets of batteries on the station, one for each pair of solar wings, butthey are only designed to last 6 1/2 years. Each battery weighs about 375 pounds(170 kg) and is about the size of a small refrigerator, astronauts have said.

The batteries onthe station?s Port 6 truss - where Cassidy and Marshburn worked Friday - are part of the outpost?s oldestsolar arrays, which launched in 2000 and have been in service fornine years. So NASA wanted spacewalkers to replace them before they died. Theold batteries will return to Earth aboard Endeavour next week.

Friday's spacewalk began at 9:54 a.m. EDT (1354 GMT) and marked the 129th excursion dedicated to space station construction or maintenance. It was also the second career spacewalk for both Cassidy and Marshburn, who will also venture out on the fifth and final outing of their mission on Monday.

The spacewalkers started their work just hours after a Russian cargo ship began its own trip to the International Space Station. The unmanned space freighter Progress 34 launched early Friday to deliver 2 1/2 tons of cargo, including fresh fruit, spare parts and other supplies to the space station.

All 13 of theastronauts aboard the linked shuttle and space station will have aday off tomorrow to rest during their busy mission.

Endeavourcommander Mark Polansky apparently told his crew, and Cassidy and Marshburn inparticular, that the time off is much deserved.

?The bosssays you?ve earned a day off tomorrow,? astronaut Dave Wolf told the spacewalkersas they returned inside the station.