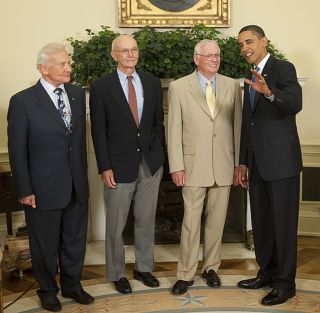 President Barack Obama poses with Apollo 11 astronauts, from left, Buzz Aldrin, Michael Collins, and Neil Armstrong, Monday, July 20, 2009, in the Oval Office of the White House in Washington, on the 40th anniversary of the Apollo 11 lunar landing.
(Image: © NASA/Bill Ingall)

Rarely have the crewmembers from Apollo 11 -- the men who first went to the moon -- gathered together since their historic mission 40 years ago today.

Last night and again today all three of them did so.

On the eve of the fortieth anniversary of Apollo 11, Neil Armstrong (the first man to step on the Moon), Buzz Aldrin (second man to do so) and Michael Collins (who stayed in the module that orbited the moon) spoke at National Air and Space Museum in Washington.

The four were speakers at the Museum's 2009 John H. Glenn lecture in space history.

Aldrin pressed for NASA to send astronauts to Mars, according to news reports. Collins also made the case for Mars. Armstrong spoke of Apollo only very briefly, then delivered a lecture on the discoveries and inventions that led to the moon landing.

Today, the three astronauts met with President Obama in the Oval Office.Obama was 7 years old when the first moon-landing occurred. He said he recalls following the Apollo missions from Hawaii.

"The country continues to draw inspiration from what you've done," Obama said, according to news reports.