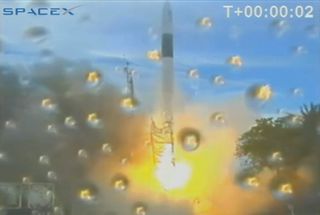 The Hawthorne,Calif.-based Space Exploration Technologies, Corp. (SpaceX) launched the smallsatellite atop its Falcon 1 rocket, a two-stage booster that made its firstsuccessful test flight last year after three consecutive failures. It wasthe fifth Falcon 1 launch for SpaceX, but its first to successfully haul a functionalEarth-watching satellite into its intended orbit.

Amalfunction in equipment used to load helium aboard the Falcon 1 rocket pushedthe mission four hours beyond its initial launch target, with stormy weatherdelaying the mission even more. SpaceX initially hoped to launch RazakSAT inApril, but the need to eliminate a vibrationissue between the satellite and its Falcon 1 rocket set the flight backseveral months.

?Secondburn and satellite separation nominal,? SpaceX officials said in an update. ?Falcon1 has successfully deployed RazakSAT into the correct orbit.?

The Falcon1 rocket launched several hours after NASA canceled its own launch of the spaceshuttle Endeavour in Florida for thefifth time, this time due to foul weather. The shuttle is slated to launchWednesday to begin a long-delayed construction flight to the InternationalSpace Station.

SpaceX,too, has its eyes on flying to the International Space Station. Founded in 2002by entrepreneur Elon Musk, a co-founder of the electronic payment servicePayPal, SpaceX is aiming to offer low-cost launches to space with its Falcon 1rocket and a larger version called Falcon 9.

The largerFalcon 9, however, is designed to launch SpaceX?sDragon spacecraft, a capsule-based vehicle tapped by NASA as one of two privatelybuilt spacecraft to ferry cargo to and from the International Space Station. NASAawarded SpaceX with a $1.6 billion contract last year to launch 12 unmanned cargoflights to the space station by 2016. The other vehicle, Orbital Sciences Corp.?sCygnus spacecraft, received a $1.9 billion from NASA for eight cargo flights.

SpaceX hasdrawn plans for a free-flying version of Dragon, called DragonLab, for spaceexperiments, as well as a manned version to launch astronauts to and from thespace station. The company plans to launch its first Falcon 9 rocket testflight sometime this year from a seaside pad at the Cape Canaveral Air ForceStation in Florida, SpaceX officials have said.