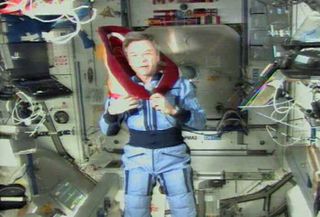 Canadian astronaut Robert Thirsk dons a convocation cape as he receives an honorary degree from the University of Calgary on July 8, 2009.
(Image: © NASA TV.)

A Canadian astronautorbiting Earth received an honorary degree - a first in space - on Wednesdayduring a long-distance call from his college alma mater.

TheUniversity of Calgary in Alberta bestowed an honorary Doctor of Laws degree on RobertThirsk, an astronaut with the Canadian Space Agency who is currently livingaboard the International Space Station. Thirsk, 55, is a graduate of the universityand Canada?s firstlong-term resident of the space station.

?This isindeed a special honor for me,? Thirsk said via a video link as his crewmate, Japaneseastronaut Koichi Wakata, presented him with a convocation cape aboard thestation. ?If I can?t be in Calgary, I think the second best place to be is inspace.?

Thirskperformed a somersault in weightlessness to show his excitement and answeredquestions from students at the university.

A veteranof two spaceflights, Thirsk holds several degrees in engineering and medicine,but received his first degree in mechanical engineering from the University ofCalgary in 1976. He later obtained degrees in medicine and business, and joinedCanada?s astronaut corps in 1983. Thirsk is from New Westminster, BritishColumbia in Canada, is married and has three children.

Thirsk ispart of the space station?s first full six-personcrew. He arrived in late May alongside a Russian cosmonaut and Belgian astronaut- representing the European Space Agency - to double what was then a three-mancrew on the station. In addition to Thirsk, the station is currently home totwo Russian cosmonauts, and one astronaut each from the United States, Japanand Belgium.

?To say we are watching this mission with great pride and interest is anunderstatement,? University of Calgary President Harvey Weingarten told the guests- including nearly 100 teenagers attending university summer camp programs - atThirsk?s degree presentation. ?Dr. Thirsk is a tremendous ambassador for theUniversity of Calgary and for Canada. His accomplishments are beyond impressiveand he is a thoroughly genuine and compassionate person.?

Thirsk isthe first of three Canadians to fly in space this year. On Saturday, NASA?sshuttle Endeavour is due to launch seven astronauts toward the station,including Canadianspaceflyer Julie Payette, who will make her second spaceflight. WhenPayette launches aboard Endeavour, two Canadians will be in space at the sametime for the first time in history.

Later thisyear, a Canadian space tourist - Cirque du Soleil founder Guy Lalibert? - will alsofly to the station under a multimillion-deal between Russia?s Federal SpaceAgency and the U.S. firm Space Adventures. Like Thirsk, Lalibert? will launchaboard a Russian-built Soyuz spacecraft from the Central Asian spaceport ofBaikonur Cosmodrome in Kazakhstan.

Afterreceiving his degree, Thirsk stressed the importance of education to Canada?sspace exploration efforts.

?When I wasa student at University of Calgary 33 years ago, I had a dream of one dayflying in space and being an astronaut,? he said. ?Fulfilling that dream is agreat feeling. Education really is the key to making your dreams come true.?

Thirsk isslated to return to Earth this fall to complete a six-month mission at thespace station.