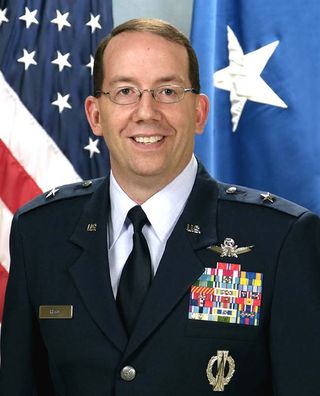 A few weeks ago I wrote about scientists who were unhappy that a purported clamp down was afoot on their use of data snagged by U.S. military spacecraft – hush hush satellites that from time to time catch natural cosmic fireballs blazing through Earth's atmosphere.

Digging in on this story is not easy. Military higher-ups and the agencies involved are guarded about how potent their satellite sensors are as they stare at Earth for nuclear detonations, missile launches and the like.

In a new exclusive interview with SPACE.com, U.S. Air Force Brigadier General Robert Rego, who is in charge of the policy guidance behind the data release, said the Air Force Space Command is "circling the wagons" to close some loopholes in the dissemination of potentially sensitive information.

U.S. Congressman Dana Rohrabacher said he's monitoring the situation and expects a solution that favors the needs of scientists.

For decades, these spacecraft have picked up incoming invaders in our air space. And over time, the scientific community has been given selected, declassified blasts of bolide (meteor) data from those satellites. It's all valuable information for space rock hounds who would go search for meteorites, and it's also useful to astronomers who aim to gauge the Near Earth Object (NEO) impact hazard posed by larger and less frequent asteroids.

But then the word from scientists was that the space rock data sharing was being short-circuited by the U.S. military. The initial story about that controversial decision has touched off talk within civilian and military circles and in Congress.

The angst of researchers was apparently sparked by a March 16 memo from Brigadier General Rego, the mobilization assistant to the Director of Air, Space and Nuclear Operations at the headquarters of the Air Force Space Command, Peterson Air Force Base in Colorado.

That communique calls for a relook at "the protection measures" for bolide reporting, due to the possible leaks of information regarding super-sensitive traits of the U.S. Nuclear Detonation Detection System.

What the system does

The system is in place to detect, locate, and report nuclear detonations in the Earth's atmosphere and near space, doing so in near real-time. It makes use of space-based sensors and ground-based mission processing systems. The sensor payloads are carried onboard the military's Global Positioning System navigation satellites, as well as Defense Support Program spacecraft.

The system also spots incoming fireballs, even gauging the energy released as an extraterrestrial piece of flotsam explodes in our atmosphere. That information can yield scientific insight, such as the object's mass as its brightness fades as it falls. A sensor-derived light curve can offer important information about how the object decelerated when it struck the atmosphere, and thereby yield implications about its strength too.

But it is also the sort of info that seems to be at the crux of military worries, forcing a "secret" stamp of disapproval in terms of freely posting this kind of light curve data for all to see.

In one case last year, according to insiders, that indeed is exactly what occurred – much to the U.S. military's vexation, energizing a relook at the chain of command in releasing bolide data.

According to a scientist familiar with using the bolide information, "it's an unfortunate change in policy." Scientists for well over a decade have been getting select slices of data churned out by U.S. classified satellites that have eyed natural fireball events in Earth's atmosphere. So the prospect of losing that link has rattled the civilian fireball-watching community.

However, it appears the U.S. Air Force is trying to find a solution that satisfies both national security concerns and scientific usability in regards to the outing of fireball data.

In an exclusive SPACE.com interview June 30, Rego made it clear that there has been no change to the data-sharing policy. Air Force Space Command has recently reiterated its existing, published guidance on bolide data classification to ensure "consistent" public release of information across a specific suite of government agencies, he said.

It's under Rego's watch that the Air Force Space Command does the job of providing guidance, identifying the classification levels of the data shared to make sure that select agencies know what information is releasable in the first place.

In reviewing the situation, what Rego found was, in lay terms, a bit too loosey-goosey.

"What we've found as we dug into this is that there was quite a bit of gapping that had occurred, even before the routine review that we did back in March," Rego said. "So notwithstanding the routine policy review, what we're doing in the next few weeks here...is circling the wagons so that we can remove some of the Ad Hoc nature."

Rego also spotlighted his concern that there's no real mechanism in place to ensure that the bolide data is sent to science researchers in a timely manner.

So by tightening the organizational ship, can the useful bolide data for scientific purposes be made available more quickly?

"Sooner and more consistently," Rego said. "We can probably do this better."

"The data is out there. It's not impacting military operations to gather the data that's important to the scientific community," Rego added. "Let's take a look at how we can do that in a timely and collegiate manner."

Given Rego's role in policy and guidance from a space perspective, what he launched last March is a review of the governmental guidance surrounding bolide reporting classification.

"And one of the elements of that is to ensure that we're protecting our national capability," Rego said. "So there's a balance there...and it goes on across everything we do from missile warning to surveillance...to things like this [distributing bolide data]."

Close eye on the situation

The flare up about the fireball data release policy has received the attention of U.S. Congressman Dana Rohrabacher, the California lawmaker with a long-time passionate interest in the entire Near Earth Object issue.

"I have been keeping a close eye on this situation, and I am confident the Department of Defense, in cooperation with the scientific community, will find a solution that permits the release of scientifically valuable data without compromising national security," Rohrabacher explained in a statement to SPACE.com.

As for a message to the scientific community, Brigadier General Rego emphasized that there was no intent, and in fact, no change to the data sharing policy. Now underway is a fresh look at ways to improve the relationship and data flow to make it more valuable to scientists.

"I would encourage you to keep your eye out or your ear to the ground with the scientific community...to see if we haven't done some improvements here over the next few months," Rego concluded.