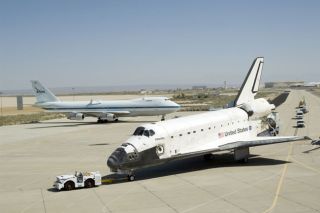 Space shuttle Atlantis is towed from the runway at Edwards Air Force Base in California after landing to conclude the 13-day mission to refurbish and upgrade the Hubble Space Telescope. Landing occurred on Sunday, May 24, 2009.
(Image: © NASA/Tony Landis)

WASHINGTON- Fresh on the heels of a successful flight to the Hubble Space Telescope, NASAis again gearing up to launch a space shuttle into orbit, but bad weather coulddelay the June spaceflight, mission managers said Thursday.

NASA hopes tolaunch the shuttle Endeavour on June 13 to deliver the last piece of Japan?smassive Kibolaboratory to the International Space Station during a marathon 16-dayconstruction flight. The hopes to build on the momentum from the recent Hubbleservice call, which ended last Sunday when the shuttle Atlantis landed inCalifornia.

ButEndeavour?s spacestation mission has a slim three-day window in which to fly and bad weatherin Florida has already delayed the shuttle?s planned Saturday move to itslaunch pad by a day.

?Really, ifwe don?t start to roll on Saturday, then it?s going to be a day-for-day impactfor the launch,? Shannon said. ?It?s getting very tight.?

The shuttleis now slated for a predawn Sunday move to the seaside Launch Pad 39A from itscurrent perch atop the nearby Pad 39B, where it was on standby to fly a rescuemission during the Hubble flight. No rescue was ever required.

Shannonsaid it is possible that shuttle technicians could make up the lost time andkeep the June 13 target, but he has ordered teams not to rush.

Endeavourhas until June 15 in which to launch toward the station, after which NASA plansto stand down to allow the June 17 liftoff of a rocket carrying a pair of moonprobes - the Lunar Reconnaissance Orbiter and LCROSS impactor - which have weathereda series of flight delays.

If NASAcannot launch Endeavour in June, the next opportunity would arise on July 12. Aslip to July should not impact plans to launch at least two more shuttlemissions after Endeavour?s later this year, Shannon said.

Shannonsaid Endeavour?s mission may also hinge on when the Atlantis can be returned toFlorida from its Southern California landing site at Edwards Air Force Base.

Engineerswant to make sure a wiring problem that caused a short circuit during Atlantis?May 11 launch will not affect Endeavour, but must wait for the shuttle to beferried home atop a modified 747 jumbo jet. That process should take about aweek, weather permitting.

Endeavourcommander Mark Polansky, who leads the shuttle?s six-man, one-woman crew, saidhis crew is hoping for an on-time launch, but is prepared for a schedule slip.

?I don?t worryabout the things that I have no control over,? Polansky told reportersThursday. ?For us, we have a mission to do?we know that when we do, our job isto be ready and carry out the mission and that?s what we intend to do.?

Polansky andhis crew have a daunting mission ahead. It is only the second time that NASAhas intentionally scheduled a long, 16-day mission to the space station. Fivespacewalks are planned to install a porch-like experiment platform to the endof the station?s Japanese Kibo lab, deliver vital spare parts and performmaintenance work.

Aone-person swap is also on tap for the station?s soon-to-be full, six-personcrew. The station is slated to double its crew size to six people earlyFriday with the arrival of a Russian Soyuzspacecraft carrying three new crewmembers.

Endeavour?smission will be the first ever to see 13 people aboard the space station. Paststation-bound shuttle flights, in which the outpost was home to threecrewmembers, saw maximum populations of 10 people.

?We?vetried to think of all those things related to having additional people onboard,? Shireman said. ?I think we have a good plan for this.?