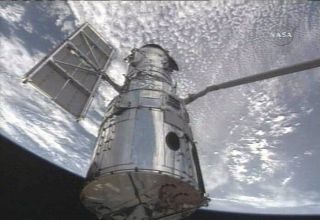 ?This isfantastic, you?re going to love it Drew,? Grunsfeld told his spacewalkingpartner. Grunsfeld is an astrophysicist-astronaut making his third trip toHubble, and his sixth career spacewalk.

Thespacewalk began a bit later than planned, but is slated to last about 6 1/2 hours and set the stage for four moreback-to-back spacewalks to make major upgrades and attempt unprecedented repairson theaging Hubble. Atlantis has a four-man team that will work in pairs totackle the grueling spacewalk schedule.

?I?mlooking forward to seeing our old friend Hubble the space telescope and seeingif it?s aged at all,? Grunsfeld said in a crew video beamed to Earth lateWednesday.

Grunsfeld lastvisited Hubble in 2002 alongside Atlantis skipper Scott Altman and fellowspacewalker Michael Massimino. But this mission is the fifth and final flightto sendhumans to revive and renew Hubble.

?Let?s dothis,? Feustel said as he floated into the shuttle payload bay.

NASAinitially canceled the $1.1 billion flight in 2004 citing it as too risky inthe wake of the Columbia shuttle disaster, but later reversed that decisionafter successfully resuming shuttle flights and testing inspecting and repairtechniques. If all goes well, the Atlantis astronauts hope to extend Hubble?slife through at least 2014.

Atlantislaunched toward Hubble on Monday and arrived two days later at the telescope?s350-mile (563-km) high orbit. NASA is keeping a lookout for space debris, whichis present in higher numbers in Hubble?s neighborhood than the 220-mile(354-km) altitude of the International Space Station.

A remnantfrom a weather satellite destroyed in a 2007 Chinese anti-satellite test zippedclose by Atlantis late Wednesday, but notclose enough to require the astronauts to fire the shuttle?s engines anddodge the space junk, NASA officials said. NASA has a second ship, the shuttleEndeavour, on standby as a rescue craft if needed.

Duringtheir spacewalk today, Grunsfeld and Feustel will install Hubble?s new WideField Camera 3, a replacement for an older camera that has been the spacetelescope?s workhorse imager for nearly 16 years.

They willhave to watch what they grab at the beginning. Images of Atlantis? cargo bay turnedup some white particulate contamination on handrails near their work site andthe astronauts must make sure they don?t stir it up into Hubble?s delicateinner workings.

The newcamera weighs 900 pounds (408 kg) and is about the size of a baby grand piano.Hubble scientists hope to use the new camera to probe deeper into the evolutionof galaxies and the shed new light on the mysteries of dark matter and darkenergy.

?We expecta huge amount of science to come out of it,? NASA?s astrophysics divisiondirector Jon Morse told reporters here at the Johnson Space Center.

Wide FieldCamera 3 will replace its predecessor - Wide Field Camera 2 - which holds aspecial place in the hearts of Hubble scientists. The last image from the oldercamera was taken the day Atlantis launched.

Installedin 1993, that older camera carried some of the first corrective mirrors forHubble?s blurry vision and is responsible for capturing many of the telescope?siconiccosmic images, such as the ?Pillars of Creation? in the Eagle Nebula. Since2007, when Hubble?s main Advanced Camera for Surveys failed, the older imagerstepped up to help fill in for the lost instrument, mission managers said.

Grunsfeldand Feustel will pack the older camera away for the return trip to Earth andthen turn their attention to a vital repair.

They planto replace a device on Hubble that routes data and images from the telescope to itsmission operations center in Earth.

The systemfailed unexpected last fall - just weeks before the Atlantis astronautsinitially planned to launch toward Hubble. The glitch forced NASA to delayHubble?s last overhaul for seven months until a spare could be rebuilt.

Grunsfeldand Feustel will wrap up their first spacewalk by adding a docking berth at theend of Hubble so a robotic spacecraft can fly up to the telescope when itsmission is ultimately over and send it to a fiery death in Earth?s atmosphere.

?SeeingHubble coming into the payload bay was pretty amazing, and rendezvous was fun,?Feustel said Wednesday in a crew video. ?Now we?re ready to go.?