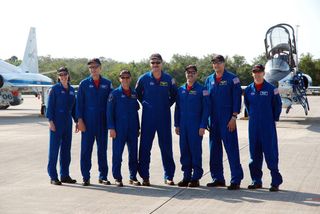 The STS-125 crew of space shuttle Atlantis pose for a snapshot on May 8, 2009 after arriving at NASA's KSC spaceport for their May 11 launch toward the Hubble Space Telescope.
(Image: © collectSPACE.com.)

CAPE CANAVERAL, Fla. — Seven excited astronauts arrived at NASA's Florida spaceport on Friday as the clocks began counting down for their mission to overhaul the Hubble Space Telescope one last time.

Veteran shuttle commander Scott Altman and his crew landed their NASA jets on a runway at the Kennedy Space Center here Friday afternoon, about an hour after the clocks started ticking down toward their planned Monday launch. Liftoff for the long-delayed Hubble mission is set for 2:01 p.m. EDT (1801 GMT) on May 11.

"Hello, Florida!" a jubilant Altman exclaimed after his crew arrived. "It's great to be here at last!"

Atlantis' 11-day mission to Hubble is NASA's fifth and final mission to upgrade the 19-year-old Hubble. But the complicated flight has been delayed since last year, when a vital part failed on the telescope.

Altman and his crew plan to fly an ambitious mission that includes five back-to-back spacewalks to extend Hubble's life through at least 2014. It has been seven years since NASA last sent astronauts to overhaul the space telescope. The Atlantis crew plans to repair two ailing instruments, install two brand new ones and perform a host of other vital maintenance work.

The astronauts said their road to the launch pad has been a long one after more than two years of intense training and delays.

"To say it feels sweet is an understatement," said Atlantis pilot Gregory C. Johnson, who will make his first spaceflight on the mission.

NASA expects an 80 percent chance good weather for the planned Monday afternoon shuttle launch, but rain at a backup landing site in Spain could thwart liftoff. The emergency landing strip will be the only one available for Atlantis when it launches due east toward Hubble from its seaside pad, mission managers said.

Atlantis has three consecutive days to attempt a launch before NASA would have stand down until May 22 due to a previously scheduled military operation at the nearby Cape Canaveral Air Force Station. The space agency has also prepared a the space shuttle Endeavour on a second launch pad to serve as a rescue ship for the Atlantis astronauts in case their ship suffers serious damage during the flight.

With just a few days remaining before launch, Altman and his crew beamed smiles to each other and television cameras gathered for their spaceport arrival today.

"The only thing I can say is, we are ready," Altman said, as he pumped his fist in the air. "Let's launch Atlantis!"