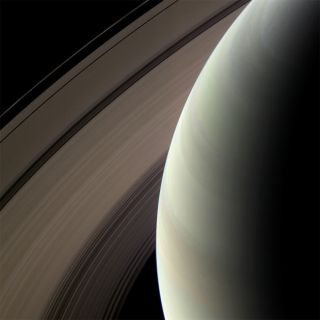 Saturn's northern hemisphere is seen here against its nested rings in this view from Cassini.
(Image: © NASA/JPL/Space Science Institute)

The Saturnprobe Cassini has snapped a new set of haunting photographs of the ringed gasgiant as it circles the planet from some 846,000 miles out.

Now a yearinto its first extended mission, Cassini has spent the last few months beaminghome the most detailed images of Saturn, its moons and the outer solar systemever seen.

Compositesof imagestaken through a wide angle lens with blue, green and red filters depict theplanet?s rings and surface in natural color. The rings cast parallel shadows onthe planet?s surface that bisect the hemispheres, captured in the latest coloredimage that NASA released on April 24. The C and B rings dominate the foregroundas gently curved and striated bands of cream and earth tones. Below, theplanet?s horizon darkens, fading from a ghostly yellow shimmer to the black ofspace. The photographs were shot on February 28 at a distance of roughly 621,000miles (1 million kilometers) from the surface.

Another imagereveals the sun-basking planet suspended amid a segment of its rings. The ringsare backlit and arch gracefully into space. They were brightened to enhancevisibility. These color-filtered images were captured on February 24 at adistance of 538,000 miles (866,000 kilometers) from the surface.

The probebegan its 111th revolution around Saturn on May 2 at 846,000 miles (1.36million kilometers) from the planet, its highest orbit to date. It will trainits cameras on star clusters to aid in calibration, then it will study Saturn?spoles and the larger rocky denizens of its rings.

The nuclear-powered spacecraft launched in 1997 as a joint United States and European mission. It traveled for seven years to reach Saturn where ithas orbited since June 2004. The mission was slated to end in 2008, but it wasextended until next year. Cassini is hardy, and its instruments have weatheredwell, so it may be rewarded with new funding that would once again extend itsmission, thistime through 2017.