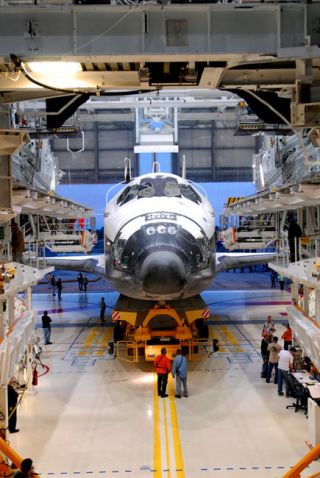 Space shuttle Endeavour is ready for the rollover from Orbiter Processing Facility 2 to the Vehicle Assembly Building at NASA's Kennedy Space Center, Fla. on April 10, 2009 to serve as the rescue ship for the last Hubble repair mission.
(Image: © NASA/Jim Grossman.)

Once NASA's space shuttle fleet is retired next year, U.S. astronauts might arrive at the International Space Station via Chinese spacecraft, according to U.S. President Barack Obama's science chief.

The prospect is being aired by presidential science adviser John Holdren, head of the White House Office of Science and Technology, in an interview posted on ScienceInsider - a web-based blog from the American Association for the Advancement of Science (AAAS).

In the ScienceInsider interview, Holdren underscored the fact that President Obama's administration is intent on retiring the space shuttle in 2010, with the president open to an additional shuttle mission flown within 2010.

"If that can't be done and things slip, then consideration will be given to going beyond that date. And that would be the last shuttle mission. There will be a gap in our capacity to put people in space with U.S. vehicles, because we will not have a follow-on to the shuttle ready before 2015," Holdren said.

Holdren went on to suggest that the U.S. will have to rely on other spacefaring partners, specifically Russia. "It might also be the Chinese, depending on how our relationship develops," he added.

"I think it's possible in principle to develop the required degree of confidence in the Chinese," Holdren said in the interview in regard to having confidence in China's ability to launch U.S. astronauts. "I put it out there only as speculation, but I don't think it should be ruled out."

China is the third nation to independently launch humans into space after Russia and the U.S. The country has launched three manned spaceflights since 2003, each with a larger crew than the last, the most recent of which launched in September 2008 and featured China's first spacewalk.

When asked if the gap between NASA's shuttle fleet retirement and operational flights of its replacement — the Orion Crew Exploration Vehicle — will be just five years in duration, Holdren said he's not eager to speculate, but added: "It's going to be at least that long."

In the ScienceInsider interview, Holdren also remarked that the White House remains interested in a space council — one that would thrash out thorny civil and military space issues to assist President Obama in decision-making.

As to how the space council will be structured, that has not been fully detailed, Holdren advised. "But there will be a space council," he said.

There's one likely avenue that may be taken. China could become a new partner in an International Lunar Network — a multi-nation effort to place science — instrumented robotic landers on the Moon's surface. China's first moon orbiter Chang'e 1 completed its successful mission earlier this year when it was intentionally crashed into the lunar surface after more than a year studying the satellite.

Also at the LPSC, Ray Arvidson of the Department of Earth and Planetary Sciences, Washington University in Saint Louis underscored work at his institution for the past couple years "to develop a sustained level of contact with the emerging planetary science community in China."

Arvidson said that an effort is underway to have the Chinese put their archives of data gleaned from that country's Chang'e-1 lunar orbiter on the NASA Planetary Data System (PDS).