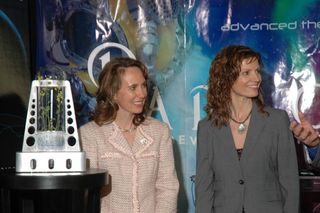 A lunar bouquet of flowers could greet astronauts who nextset foot on the moon.

Odyssey Moon, a team competing for a $30 million purse inthe GoogleLunar X Prize contest, officially joined forces with another private spacefirm Friday to deliver the first greenhouse to the moon as part the "LunarOasis" project.

"Imaginea bright flower on a plant in a crystal clear growth chamber on the surfaceof the Moon, with the full Earth rising above the Moonscape behind it; theseare the ideas that got me interested in space," said Jane Poynter, presidentand founder of Paragon Space Development Corporation.

The Paragon-developed greenhouse would become part ofOdyssey Moon's quest to win the Google Lunar X Prize. That $30 million race requiresprivate teams to land a robot on the moon and complete several tasks, includingtraveling 1,640 feet (500 m) and sending high definition images back to Earth.

Paragon previously bred the firstanimals through complete life cycles in space, and grew the first aquatic plantin space. The Tucson-based firm is also a manufacturer of components for NASA'sOrion spacecraft that will returnastronauts to the moon.

A NASA Ames planetary scientist, Chris McKay, has alsosigned on to provide support for the Lunar Oasis science team.

"The first plant to grow from seed and complete itslife cycle on another world will be a significant step in the expansion of lifebeyond the Earth," McKay noted. "The sooner we do it the better."

Paragon itself grew out of the Biosphere 2 project, which Poynterparticipated in along with future husband and Paragon CEO Taber MacCallum. Thecouple spent two years living with six other people in a 3.2-acre greenhousestructure in Oracle, Arizona — the largest closed system ever built.

Any lunar greenhouse would have to remain just as tightlysealed, given the inhospitable environment on the moon.? But a successfuldelivery might provide a boost for Odyssey Moon, even if the space firm doesnot capture the Google Lunar X Prize and beatout other teams in the race to the moon.

"We are thrilled to have Paragon join the team withtheir expertise in thermal and biological systems," said Robert Richards, OdysseyMoon founder and CEO. "I am incredibly inspired by our hope to grow thefirst planton another world."