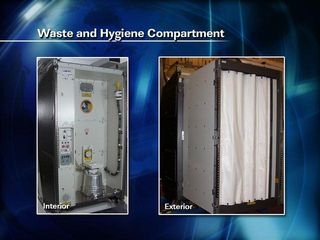 NASA may consider putting Stephen Colbert's name on aspace toilet, after the comedian came out on top of the U.S. space agency'sonline naming poll for a new space module.

The eponymous host of "The Colbert Report"swept in as a dark-horsechallenger after urging viewers to enter his name through a write-inoption. When voting ended March 20, "Colbert" had amassed more than230,000 votes to beat out second-place name "Serenity" by more than40,000 votes.

"Come on, Serenity?" Colbert said on his March10 show. "That's not a space module, that's a Glade plug-in."

The Node 3 module contains eight fridge-sized racks formany of the space station's life support systems, such as the newspace toilet, as well as an observation deck that contains a work stationfor the International Space Station's 57-foot robotic arm. It is currentlyslated for launch later this year to the space station.

Colbert pressed NASA's human space flight chief, BillGerstenmaier, to name the space module after him during a show on March 10. ButGerstenmaier was noncommittal, saying only that the space agency would have to"thinkabout that" as the votes came in.

NASA spokesman John Yembrick said the Node 3 namingdecision would not be made until April and that the "highest voted names"were receiving the most consideration.

"As for the toilet rumor, we don?t want to flushaway any goodwill by announcing something before we are ready," Yembricksaid.

The Node 3 naming contest attracted nearly 1.2 millionvotes, with other write-in suggestions also coming in strong."Myyearbook" placed third behind "Serenity" with 147,637votes, while "Gaia" finished fourth at 114,427.

NASA recently opened a new namingcontest for its Mars Science Laboratory rover on Monday, although nowrite-in option exists there.

But the U.S. space agency has expressed strong interestin incorporating public opinion, as evidenced by previous naming contests forthe Spirit and Opportunity rovers and the Harmony space station module. Thatmeans "Colbert" fans may want to keep watch for the officialannouncement next month.

"We haven't decided on a name yet, but we'recertainly not going to ignore more than 230,000 'Colbert' votes from thepublic," Yembrick noted.