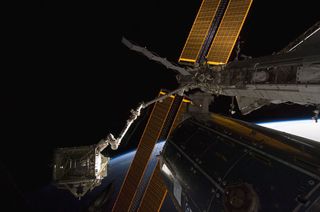 The S6 truss (lower left) rests at the end of Canadarm2, the International Space Station's robotic arm as astronauts deliver it during NASA's STS-119 mission in March 2009.
(Image: © NASA)

Twospacewalking astronauts floated outside the International Space StationThursday to help attach the last pair of solar wings for the orbital lab?spower grid.

?It?s a lotbigger than when you left it, you guys were outstanding,? stationcommander Michael Fincke told the spacewalkers as they began wrapped uptheir work. ?Thanks for the hard work.?

Deliveredby the shuttle Discovery, the $298 million solar wings are due to be unfurledon Friday. Until then, they?ll stay folded up like oversized maps inside theirstorage boxes.

The stationcurrently has six solar wings, two for each of its three deployed arrays. Whenthe new arrays are deployed, the station will have eight wings, with four oneach side giving it a symmetrical look.

Astronautsinside the space station used the orbiting lab?s robotic arm to gently ease thesolar wing segment in place, making tiny adjustments based on verbal cues fromSwanson and Arnold, who had a ringside seat to the delicate attachment.

?It wasn'tquite as smooth as we had hoped, but those guys did a great job,? saidDiscovery astronaut Joseph Acaba, who choreographed the spacewalk from theshuttle and - like Arnold - is a former schoolteacher.

Thursdayspacewalk began at 1:16 p.m. EDT (1716 GMT) as the docked shuttle and spacestation flew 220 miles (354 km) above the Pacific Ocean near New Guinea. WhileSwanson and Arnold worked outside, their crewmates inside the stationsuccessfully repaired Discovery?s broken exercise bike.

?It was agreat team effort out there today,? Swanson said. ?Wonderful.?

Each of thespacestation?s new solar wings will extend about 115 feet (35 meters) whendeployed and, together, will boost the outpost?s power grid by 25 percent. Whencomplete, the four U.S. solar arrays will generate enough electricity to power42 average sized homes, NASA has said.

That poweris vital for the space station, where astronauts hope to increase the amount ofscience performed inside its U.S., Russian, European and Japanese modules. Theextra power will also be needed once the space station doubles its crew size upto six people in late May.

The newstarboard solar wings are moored to a 31,000-pound (14,061-kg) girder known asthe Starboard-6 (S6) truss. It is the lastmajor American-built piece of the $100 billion International Space Stationand the final part of the outpost?s 11-segment main truss.

With the S6girder?s installation, the space station now weighs nearly 1 million pounds(453,592 kg), with its backbone-like main truss extending more than 300 feet(91 meters), long than a football field. The space station can be easilyspotted from Earth by the naked eye on a clear night.

It was thethird career spacewalk for Swanson, who finished with 19 hours and 52 minutes,and the first for Arnold, who is making his first spaceflight.

Discovery?smission initially included four spacewalks and one extra day. NASA shortenedthe flight after a series of launch delays so the shuttle crew could completethe construction work and leave the station before the arrival of a previouslyscheduled Russian Soyuz spacecraft.

That Soyuzis due to launch a new crew and Americanbillionaire Charles Simonyi, who is paying about $35 million for his secondspace tourist flight, to the station next week.