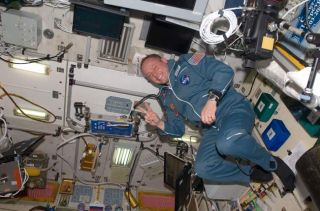 NASA astronaut Michael Fincke, Expedition 18 commander, smiles for a photo in the Zvezda Service Module of the International Space Station during the first few hours since his arrival on the Soyuz TMA-13 spacecraft on Oct. 14, 2008.
(Image: © NASA.)

For most ofus on Earth, a birthday typically means another year older and maybe some cakewith friends. But on Saturday, NASA astronaut Michael Fincke will celebrate hisbirthday without such luxuries aboard a $100 billion space station 220 miles (354 km) above Earth.

NASA hasopened the gates for the public to send an electronic birthday card to Fincke,who will celebrate his 42nd birthday Saturday aboard the International SpaceStation, far from his wife Renita and their three children.

Instead, Fincke - atwo-time spaceflyer who currently commands the space station - will have onlyhis two crewmates for company. To make up for it, NASA has set up a portalfor the public to send birthday wishes to Fincke using one of four differentelectronic cards.

?There arefour postcards with greetings like ?Hope your birthday is out of this world,??said NASA spokesperson Brandi Dean Friday during the agency?s daily spacestation commentary hour. ?The cards will be e-mailed up to Fincke on orbit.?

The digitalbirthday cards include images of Fincke taken during his two spaceflights.

In2004, he was orbiting the Earth as an Expedition 9 flight engineer when his secondchild - daughter Tarali - was born. He spoke to his wife by telephone during thedelivery, but had to wait until he landed four months later to hold his daughterfor the first time. More recently, he cheered his beloved Steelers on to victoryin last month?s Super Bowl from the space station.

It?s been abusy week for Fincke and his crew.

The astronauts are in the home stretch oftheir six-month Expedition 18 mission and are awaiting the launch of NASA?sspace shuttle Discovery, which is slated to liftoff on Sunday to deliver newsolar arrays and Japanese astronaut Koichi Wakata to the space station. Wakatawill replace NASA astronaut Sandra Magnus as a member of the station?s crew. Finckeand Russian flight engineer Yury Lonchakov are due to land in early April.

Thespaceflyers also hadto take refuge inside their docked Soyuz spacecrafton Thursday when a piece of spacetrash flew too close to the space station. The measure was safety precaution incase the debris ? later found to be a 5-inch (13-cm) wide remnant of an oldrocket motor ? punched a hole in the station and forced an evacuation. The debrispassed the station by without incident and life aboard the station returned tonormal.

Earlierthis week, Fincke and Lonchakov ? who celebrated his own 44th birthday lastweek ? spent nearlysix hours spacewalking outside the International Space Station to add anexperiment and perform other maintenance. Fincke said the views of Earth frominside his spacesuit was a great way to mark his birthday.

"Thisis a great gift for my birthday," Fincke said during the Tuesday spacewalk.