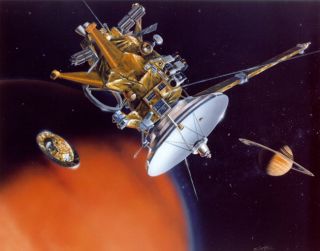 Cassini has fallen back on a reserve set of propulsionthrusters during its extended tour of Saturn.

Lacking space tugs orrobotic repairmen, the Cassinispacecraft activated its backup thrusters because of slow degradation inthe performance of its main thrusters. The primary thrusters have kept thespace probe going since its launch in 1997 until now.

The Cassini mission has uncovered many new findings aboutSaturn, its rings and local moons. It sent its Huygensprobe down to peer beneath the orange shroud of methane around the moonTitan, sampled icy particles spewing from coldEnceladus and surveyed bizarreweather patterns on Saturn.

This marks only the second time during Cassini's 11 yearsof flight that engineering teams have decided to go to a backup system. Almostall Cassini engineering subsystems have redundant backup capability.

Cassini has already completed its original four-yearplanned mission, and is currently in extended mission mode. Plans are underwayfor a proposal to add even more years to the spacecraft's life by extendingits tour through 2017.