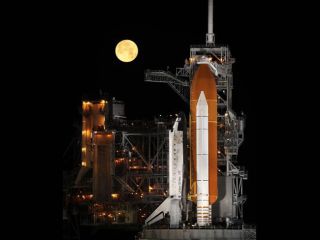 CAPECANAVERAL, Fla. - NASA's shuttle Discovery and its seven-astronaut crew willhave to wait at least a few more days to rocket into orbit after a last minute gasleak prevented a Wednesday launch attempt.

Missionmanagers called off Discovery?slaunch attempt after detecting a leak of gaseous hydrogen in a line thatruns into the shuttle?s attached external fuel tank. NASA is now targeting a launch for no earlier than March 15 at 7:43 p.m. EDT (2343 GMT). The extra time will allow engineers to take a look at the leak and make necessary repairs, mission managers said in a briefing after the launch attempt.

"Teamsare going to get together and assess the repair options," said NASAspokesman Allard Beutel.

Wednesday?slaunch delay is the latest in a seriesof setbacks that have postponed Discovery?s STS-119 mission for a month. Theshuttle was initially slated to launch on Feb. 12, but concerns with suspectfuel control valves in the spacecraft?s main engines prompted additional delaysso engineers could replace them.

Like theleaky gas hydrogen line that thwarted Discovery?s Wednesday launch, the shuttle?sthree fuel control valves are also designed to maintain the proper pressure insidethe liquid hydrogen fuel reservoir of the orbiter?s attached external tank. Asimilar valve on the shuttle Endeavour cracked during a November 2008 launchand NASA wanted to be sure a similar problem did not pose a risk to Discoveryand its crew.

Discovery?svalves were replaced twice, with mission managers deciding earlier this monththat the shuttle was fit to fly.

Commandedby veteran shuttle flyer Lee Archambault, Discovery'sseven-astronaut crew will launch toward the International Space Stationcarrying the outpost's final pair of U.S.-built solar wings and the last segmentof its backbone-like main truss. The14-day mission will also ferry Japanese astronaut Koichi Wakata to thestation, where he will replace NASA astronaut Sandra Magnus as a member of theorbiting lab's three-person crew. Wakata is Japan's first long-durationastronaut and is due to return to Earth later this summer.

IfDiscovery is unable to launch Thursday, a third attempt is possible on Friday.NASA has until March 17 to launch the shuttle before standing down due to apreviously scheduled Soyuz flight to ferry the new Expedition 19 crew to thespace station. If the shuttle cannot launch by March 17, NASA plans to standdown until after the space station crew change, with the next launch windowopening on April 7.