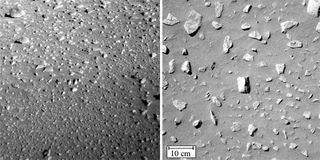 Small rocks called clasts are uniformly spaced along the surface of Mars, including in the intercrater plain between Mars' Lahontan Crater. The images were taken by the navigation camera (left) and panoramic camera (right) aboard the Mars Rover Spirit.
(Image: © Geological Society of America.)

Rocks onMars are in some areas scattered in a strangely uniform fashion, puzzlingscientists for years. Now they've figured it out.

Researchershad thought the rocks were picked up and carried downwind by extreme high-speedwinds thought to occur on Mars in the past.

AlthoughMars is a windy planet, its atmosphere is very thin, so it would be difficultfor the wind to carry the small rocks, which range in size from a quarter to asoftball, said Jon Pelletier, a geoscientist at the University of Arizona inTucson.

Pelletierand his colleagues now think the rocks are constantly on the move, rolling intothe wind, not away from it, and creating a natural feedback system that resultsin their tidy arrangement.

The rocksprotect the tiny sand mounds from wind erosion. Those piles of sand, in turn,keep the rocks from being pushed downwind and from bunching up with oneanother.

"Youget this happening five, 10, 20 times then you start to really move thesethings around," Pelletier said. "They can move many times theirdiameter."

Because themiddle and outer rocks are not directly hit by the wind, the wind creates pitsto the sides of those rocks. And so, instead of rolling forward, the rocks rollto the side, not directly into the wind, and the cluster begins to spread out.

The researchis published in the January issue of the journal Geology.

Severalpieces of evidence have come together to support this idea of how rocks areorganized along some areas of the Martian surface.

Forinstance, when study team member Andrew Leier of the University of Calgary in Canada was a graduate student at UA, he told Pelletier about an experiment on theupwind migration of rocks that his thesis advisor James Steidtmann of the University of Wyoming had conducted.

Steidtmannused a wind tunnel to see how pebbles on sand moved in the wind, revealing the rocksmoved upwind and that over time, a regular pattern emerged.

Some timelater, while attending a lecture that showed pictures of uniformly organizedrocks on Mars, Pelletier recalled his conversations with Leier, and it all cametogether.

Meanwhile,Leier had noticed a similar phenomenon when observing sand dunes in Wyoming. Basically, loose pebbles and rocks there seemed to spread away from each other inan almost organized fashion ? similar to what is seen on the sandy surface ofMars.

In therecent study, Pelletier tested out the idea with three computer models,including models of air flow, sand erosion and deposition, and rock movement.He compared the model results with the distances between each rock and itsnearest neighbor in Mars images taken by the Mars Exploration Rover, Spirit. The patterns of the Martian rocks matched what themodel predicted.

Pelletierplans to apply the same numerical models to larger features on Mars such assand dunes and wind-sculpted valleys and ridges called "yardangs."