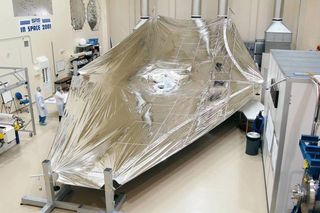 The sun shield created for the James Webb Space Telescope will reach the size of a tennis court.
(Image: © NASA/Northrop Grumman)

The largestsun shield ever made has been created for the Hubble Space Telescope?ssuccessor. The enormous sun blocker will unfold in space into the size of atennis court, despite being hundreds of thousands of miles away from the helpof a human hand.?

Thekite-shaped layers of the sun shield for NASA's James Webb Space Telescope(JWST) will block out the sun's ultraviolet radiation and protect the machineryfrom high-speed impacts of tiny space debris.

No other spaceobservatory has had such an enormous or membrane-based sun shield, said MarkClampin, NASA?s Webb Telescope Observatory project scientist at Goddard SpaceFlight Center in Greenbelt, Md. The Hubble Space Telescope is equipped with alight shield, but it is nothing like the new sun shield in the works for theWebb. In addition, other solar shields, such as the one aboard the infrared SpitzerSpace Telescope, are fixed and so don't need to be deployed once in orbit,as the Webb will be.

"Ifyou could imagine, this would be like going outdoors applying sunscreen of 'SPF'of 1.2 million on your skin," said Martin Mohan, program manager for the telescopeat Northrop Grumman in California. "Previous to this crucial technology,materials with thermal properties that reflect the sun without being heated didnot exist."

The JamesWebb Space Telescope, set for launch in 2013, will make observations mainlyin the infrared range of the electromagnetic spectrum, with some capability invisible light. In space, JWST will reside in an orbit that's 1 million miles(1.5 million km) from Earth at what is called the second Lagrange point.

Once it is erected,the sun shield will sit below and perpendicular to the telescope?s upright,primary mirror, which will span 21.3 feet (6.5 meters) in diameter. (Forcomparison, Hubble'sprimary mirror measures about eight feet, or 2.4 meters, in diameter.) The sunshield consists of five layers of Kapton (a mylar-like material made by DuPont)with aluminum and special silicon coatings to reflect the sun's heat back intospace.

While thesun-facing side of the sun shield will block out sunlight, the other sidefacing away from the sun will minimize light scattering as well as heat.

"Theother side of the telescope you think of as being dark," Clampin said. "Butwhen you're trying to find the first galaxies in the universe, even a smallamount of light that's scattering from different places on the telescope canreally hurt you."

Clampinadded, "And we're talking about infrared light here, so heat sources onthat side of the telescope can actually scatter light into the telescope and beseen as a signal, so you have to be very careful."

Overall,the sun shield will keep the telescope at a cryogenic minus 387 degreesFahrenheit (minus 233 degrees Celsius). Any warmer than that and the heat givenoff from the telescope would corrupt the infrared observations.

"Infraredis heat radiation. In order to see the faint glow of infrared heat from distantstars and galaxies, the telescope has to be very cold," said JonathanGardner, NASA?s deputy senior project scientist for the Webb Telescope atGoddard. "If the telescope were heated by sunlight or the warm glow of theEarth, the infrared light emitted by the telescope would outshine its targets,and it wouldn't be able to see anything."

The sun shieldtechnology is new in many more ways, its developers said.

Forinstance, complete passive cooling, in which refrigerants aren't used to keeptemperatures down, is new to the field of telescopes and should keep JWST alivefor its mission lifetime of no less than five and a half years, with anoptimistic goal of 10 years, Clampin said. The other infrared observatoriesrelied on cryogens, such as liquid nitrogen or liquid helium as their primarymeans of cooling, Clampin said.

"Theadvantage of that is it gives you a pretty long lifetime for the telescope,"Clampin told SPACE.com, referring to the no-refrigerant approach forJWST. "The other approach is to put a telescope in a big fridge and fill itwith coolant but that coolant slowly boils off and you have a limited life."

Due to itssize, the sun shield will have to be compactly folded, much like a parachute,around the telescope in order to fit into its launch rocket.

"Therehave been a lot of missions that have unfolded large antenna," Clampinsaid. "To our knowledge it's one of the first missions where we areunfolding a really big membrane."

And so theengineers had to figure out how to fold the coated membranes, which make up the layers of thesun shield, to make sure they didn't get tangled upon opening and so that theunfolding didn't rub off any of the coatings, Clampin said.

Once theshield and the rest of the telescope are on their way to final orbit, engineersat Northrop Grumman will issue commands to the Webb Telescope to unfold the sunshield.