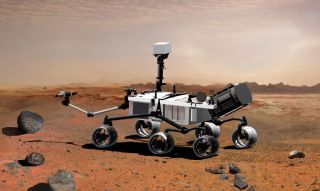 NASA's Mars Science Laboratory is tentatively planned for 2009 liftoff. The nuclear-powered rover is loaded with scientific gear, including a caching device to collect specimens for possible return to Earth by a follow-on mission.
(Image: © JPLCorby Waste)

The Mars Science Laboratory (MSL), scheduled to launch in fall 2009, will follow the Mars Exploration Rovers and the Phoenix Lander to help determine if Mars is habitable for life.

MSL's instrument package will be able to effectively "see and taste" the martian environment with more accuracy than previous missions. Some instruments will be so sensitive they will be able to pick out a single nanogram of organic matter (one billionth of a gram), about the weight as a single human cell. That high level of sensitivity has made contamination control one of the most challenging aspects of the mission.

Habitat for Past or Present Life?

As on Earth, the history of Mars can be pieced together by looking at the structure and composition of rocks and soil. Previous missions to Mars have not found organic compounds on the Red Planet, the chemical building blocks of life that are found in carbohydrates, fats and proteins.

However, scientists think organics should be on Mars, delivered either by comets or asteroids or through chemical processes tied to volcanic activity in a freezing climate. Scientists hope to use MSL to find these missing organics and determine how prevalent they are.

"One thing we want to do with the Mars Science Lab is understand the chemical environment for survival and the preservation of organic molecules, and whether they survive at the surface," says Mahaffy. "A prime objective of the mission is to really understand whether organics can survive in the present chemical environment of Mars, which we really don't know enough about to be able to predict."

To prevent most of the contamination, the mission is using "class 1,000" to "class 100" clean rooms for assembling many critical rover elements. Class 100 rooms allow for less than 100 particles per cubic foot of air ("particles" are defined as dust or other airborne bits larger than several microns.)  A typical office environment has several million particles per cubic foot of air.

While clean rooms can prevent contamination from hair and skin flakes, most of the potential contamination is expected to come from the rover itself. Much of the rover will be made out of plastics and elastomers, which are derived from organic sources. How will scientists tell which organic compounds came from Mars, and which were brought from Earth?

"It's like when you buy a new car and you have that new-car smell," explains Astrobiologist Inge ten Kate, who works with Mahaffy on the MSL mission at Goddard. "That new-car smell is because molecules are getting loose from the materials the car is made of."

Every piece of material that becomes part of the rover, either through design or as part of the mission process, is a potential source of contamination. Because the mission's instruments will be highly sensitive, the tolerance levels for such contaminants are lower than for any other Mars mission. "We don't want to pick up any signals from our rover," says Ten Kate. "We only want to pick up the signals that are found on Mars."

To make sure contaminants don't interfere with mission data, scientists have thought through every aspect of the mission, from the spacecraft's descent, to how samples are collected and stored inside the instrument lab.

An entirely new aspect of the mission includes a powered descent and guided landing scenario. As the spacecraft nears the surface, it will discharge the rover down an umbilical-like cord. Once the rover lands safely, the bridle will be cut, and programmers will steer the descent vehicle far away from the landing site to minimize any contamination from propulsion products.

The Mars team is also building a database of many materials from the rover that could potentially come into contact with Mars. The contamination team at Goddard uses a gas chromatograph and mass spectrometer to analyze each organic compound that makes up the rover's surface and interior. The chemical profiles will be used to recognize any Earth material that might make its way into the martian samples.

"Each type of material is being tested by slowly heating it up and measuring the composition of the gas. Or we are wiping down parts of the instrument with solvents so we can look at the different types of compounds that are wiped off," says Ten Kate. "We will know what kind of materials we are taking with us so we will be able to recognize them in the martian samples."

It will be impossible to completely remove every source of contamination. So MSL scientists also will run a procedure on any sample obtained that contains organics. An easy-to-recognize compound will be used to calibrate the instruments, giving the team a signature with which they can identify any Earth contaminants.

The "check" material "is a very, very pure and very, very clean material, containing a fluorinated organic compound that has a signature distinct from anything we will find on Mars," explains Mahaffy. "So when we get to Mars, we'll drill into this material, we'll let some of that fall down into one of our sample cups, we will analyze it in our ovens, and if we start seeing signals of any other compounds besides our check material, then we can suspect that material might have been brought by the spacecraft from Earth."

Through these and other control measures, MSL scientists expect to understand and control, wherever possible, any compound that could threaten the quality of a martian organic signal. The results will help determine whether Mars could be a potential habitat for any present or past life.