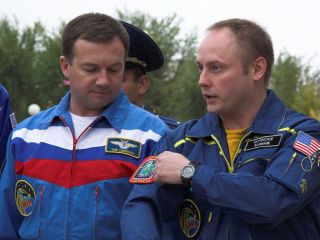 HOUSTON - Asthe commander of the next Soyuz launch to the International Space Station, YuriLonchakov was in charge of designing a patch to represent his three-personcrew.

In someways, his job was made easy. With a long history of flights and mission patches- including two that incorporated his name - Lonchakov knew what elements heneeded to include.

"Iwill have [on] my patch maybe Earth and three people in spacesuit who grab theEarth and [at the bottom of the patch] will be 'TMA-13'," he told collectSPACE.comin July, noting the inclusion of his mission's designation. He also planned toinclude his name and those of his crewmembers Michael Fincke and Richard Garriott.

At thecenter of the capsule-shaped insignia would be the number 100.

"Andthis will be 100[th] flight in Soyuz with people," said Lonchakov.

Two monthslater in mid-September, Lonchakov and his crewmates received the firstprototypes of their patches exactly as Lonchakov had described. The 100th crewto ride a Russian Soyuz would dress the part; their patches boldly exhibitingthe milestone their mission would fulfill when it blastsoff on Sunday at 3:01 a.m. EDT (0701 GMT).

Less than aweek before Soyuz TMA-13 was scheduled to launch, Russia's Federal Space Agencypublished an article on its Web site, which when translated to English wasessentially titled, "On what basis is the Soyuz TMA-13 mission the 100th?.?Written by Alexander Zheleznyakov, one of Russia's leading space experts and amember of the Russian Academy of Space Exploration, the article seemed to callinto question the central theme of Lonchakov's design, literally.

"Sucha calculation is a 'drag for the ears' and has never been used," wroteZheleznyakov of how the total of 100 was reached, adding, "I do notrecommend it," as it'll take a long time to explain.

Brieflythen, what Zheleznyakov outlines is the difference between Soyuz spacecraftthat carried people and those that launched and reached orbit with cosmonautsaboard since thefirst Soyuz mission in 1967: a difference of just three flights.

Two of theSoyuz at issue both had crews on-board, but had to abort before they couldachieve orbit. Taking place in 1975 and 1983 respectively, the two would-bespace missions weren't even given proper designations. Since the start of thespace age, the then Soviet Union made it a point not to name their missionsuntil they were safely in space, so even then Soyuz 18-1 and Soyuz T-10-1, asthey are now recorded, didn't count.

At leastSoyuz 18-1 (also referred to as Soyuz 18a) made it to space. At 90 milesaltitude, a stage separation failure forced the Soyuz to automatically rocketfrom its booster, saving the lives of Vasili Lazarev and Oleg Makarov, who thenflew a suborbital trajectory back to the ground.

SoyuzT-10-1 (Soyuz T-10a) didn't even leave the launch pad, or rather, its rocketdidn't. The Soyuz, with Vladimir Titov and Gennady Strekalov inside, was pulledto safety two seconds before the booster exploded due to a fire on the pad. Thelaunch escape system's thrusters lifted the Soyuz just over 2,000 feet (610meters) into the air before the vehicle plunged back to the earth under anemergency parachute.

And thenthere's Soyuz 34, which orbited successfully in 1979, but was launched withouta crew. Docking with the Salyut 6 space station, it returned to Earth withVladimir Lyakhov and Valery Ryumin, who in turn had launched on Soyuz 32. Thelatter spacecraft returned to Earth empty.

Thus,Zheleznyakov argues, Soyuz TMA-13 will only be the 97th manned Soyuz to launch,or 99th if you consider the two aborts to be missions. To reach 100, you wouldneed to ignore launches altogether and count spacecraft that at any pointduring its flight had cosmonauts aboard.

Ultimately,he writes, "the figure is not correct."

Correct ornot, barring a last minute change of patch, the crew of Soyuz TMA-13 willlaunch on Sunday, October 12 with a '100' on their spacesuits.

Clickhere to visitcollectSPACE.com to see the Soyuz TMA-13 patch in detail.