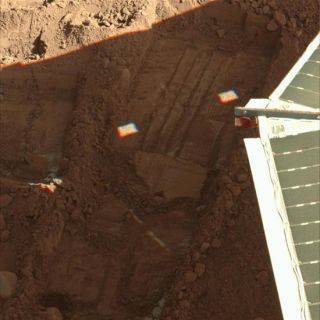 The Surface Stereo Imager on Phoenix took this shadow-enhanced image of the trench, on the eastern end of Phoenix's work area, on Sol 103, or the 103rd day of the mission, Sept. 8. The trench is about 9 inches (23 centimeters) wide.
(Image: © NASA/JPL-Caltech/University of Arizona/Texas A&M University)

As winter's icy grip prepares to take hold of the northern plains of Mars, NASA scientists are scrambling to fill all of the instruments aboard the Phoenix Mars Lander with samples of Martian dirt before the sun sets below the horizon and the spacecraft loses its energy source.

The next dirt sample delivered to the lander will go into the fourth and final cell of Phoenix's wet chemistry laboratory, according to the team's latest plans. The team also plans to fill the last four of the eight one-time-use ovens of the lander's Thermal and Evolved Gas Analyzer (TEGA), delivering dirt to each oven before analysis is complete on the previous sample.

The strategy is to take as many samples of the dirt as possible while there is still enough energy for the spacecraft to use its robotic arm to dig up the Martian surface.

Phoenix gets its energy from its two solar panels that stick out from it like wings. As the northern Martian summer comes to a close, the sun is beginning to dip below the horizon, reducing the amount of sunshine reaching the solar panels and therefore the amount of electricity they generate to run the lander.

"Now that the sun is not constantly above the horizon at our landing site we are generating less power every sol," said Phoenix project manager Barry Goldstein of NASA's Jet Propulsion Laboratory in Pasadena, Calif. "When we landed in late May, and through much of our mission, we generated about 3,500 watt-hours every sol [or Martian day]. We are currently at about 2,500 watt-hours, and sinking daily. With the remaining sols we need to scurry to squeeze the last bit of science out of the mission."

(One hundred watt-hours is equivalent to the power needed to illuminate a 100-watt bulb for one hour.)

The $420 million Phoenix mission is digging up and analyzing samples of the Martian dirt and rock-hard subsurface ice layer in the northern plains of the Martian arctic, in an effort to shed light on Mars' past potential habitability. Phoenix is currently in the middle of a one-month mission extension that began after the primary mission ended at the beginning of September.

The sample that will be delivered to the last of the lander's wet chemistry lab cells will be from the "Snow White" trench on the eastern end of Phoenix's work area. A sample from this trench analyzed by TEGA in July confirmed the presence of water ice on Mars. The wet chemistry lab, which dissolves the dirt sample in water brought from Earth to look for soluble minerals, has also previously analyzed a Snow White sample; it identified magnesium, sodium, potassium, chloride and perchlorate in the surface regolith.

The perchlorate finding was of particular interest because of the compound's potential to be an energy source for microbes, but analyses of the dirt in TEGA haven't turned up a signal of perchlorate. Mission scientists planned to keep looking for the signal in future TEGA samples.

The next TEGA sample will also come from Snow White. The team plans to use the rasp on the end of Phoenix's robotic arm to churn up ice-rich material from the hard floor of the trench.

TEGA's tiny ovens bake the surface samples to different temperatures and analyses the vapors given off at each temperature increase to identify the chemical make-up of the Martian surface dirt.

A valve that pushes the vapors given off by the sample to the lander's mass spectrometer for analysis is no longer reliable, NASA said, but researchers think that the remaining samples going into TEGA will give off enough carbon dioxide and water vapor to carry any other vapors along to the spectrometer.

The Phoenix team is also testing possible workarounds for an unexpected opening of another valve in the instrument.