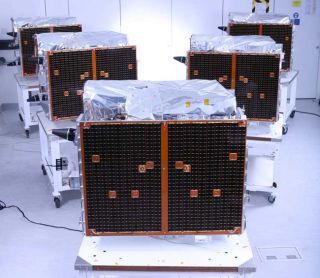 The RapidEye constellation shown here is designed to provide insurance and food companies, farmers, governments, and other agencies and institutions throughout the world with up-to-date, customised information products and services. DLR, the German Aerospace Center, will use some of its scientific data.
(Image: © SSTL/UK.)

PARIS - Thefive-satellite RapidEye commercial Earth observation constellation launchedsuccessfully on Friday aboard a silo-based Dnepr rocket from Russia's BaikonurCosmodrome in Kazakhstan. All five satellites have sent signals and are healthyin low Earth orbit, the satellite's owners and the prime contractor said.

Brandenburg,Germany-based RapidEye AG, formed 10 years ago to build what was to have beenan entirely privately funded Earth observation system, expects to beginoperations of the five identical satellites following three months of in-orbittesting and final satellite positioning.

"Thelaunch and the satellites' condition in orbit all have gone perfectly,"RapidEye Chief Executive Wolfgang Beidermann said in an interview. "Weexpect to be operational in about 13 weeks. The year 2008 therefore will benegligible in terms of revenues, but our targets for 2009 are at least 20million euros ($29.5 million). Anything north of that we will consider asuccessful year."

Thesatellites were built by Surrey Satellite Technology Ltd. (SSTL) of Guildford,England, with the five-band multispectral optical imager provided byJena-Optronik of Jena, Germany. The satellites will take pictures with a groundresolution of (21.3 feet) 6.5 meters, and a picture width of about 48 miles (78km).

The five330-pound (150-kg) satellites together will image some 4 million squarekilometers per day from their orbit at 403 miles (650 km) in altitude. Thesatellites will be stationed 19 minutes apart in their orbit, which isnear-polar but will image areas between 75 degrees north and 75 degrees southlatitude.

Insurance,forestry and agricultural markets are expected to be the primary users of theRapidEye system, Beidermann said.

"It'sfair to say we're over-the-Moon happy about this," Davies said. "Ithas been a long wait."

RapidEyewas formed in 1998 and initially hoped to complete its project financing intime to be in operation in 2002. But completing the financial package provedmore difficult than planned and ultimately required the involvement of theGerman Aerospace Center, DLR, which adopted RapidEye as part of Germany'snational space program. DLR said in a Friday statement that the agency has invested15 million euros in RapidEye. DLR's role in the project, as a co-fundingpartner, is similar to the agency's role in the TerraSAR-X radar Earthobservation satellite now in orbit.

"AfterTerraSAR-X, RapidEye is the second major space project in the Public PrivatePartnership (PPP) area," DLR board member Ludwig Baumgarten said in a Fridaystatement, adding that  DLR has other Earth observation satellite projectson the horizon.

RapidEyehas raised some 160 million euros, which Biedermann said is sufficient to pay forthe construction and launch of the satellites, related ground infrastructureand operating costs through 2009, when the company expects to reach the cashflow break-even point.

Slightlymore than 50 percent of the financing has come from a consortium of two Germanbanks Commerzbank and KfW, the lead arrangers, and Export Development Canada, aCanadian bank.

Twenty-fivepercent of the financing came from strategic partners including MDA and otherRapidEye contractors and DLR. The remaining 24 percent came in the form ofgovernment subsidies from the State of Brandenburg and from the EuropeanUnion's regional development and innovation fund, Efre.