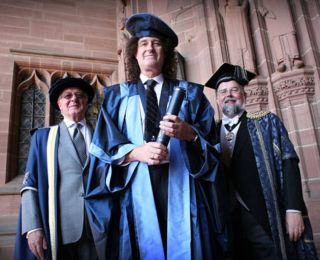 Dr Brian May CBE was confirmed as the new Chancellor for Liverpool John Moores University following a unanimous decision by the University's Governing Body in November 2007. The image includes Pro-Chancellor and Chairman of the Board, Sir Malcolm Thornton , LJMU's new Chancellor Dr Brian May and Vice Chancellor Professor Michael Brown.
(Image: © LJMU)

The founder of the legendary rock band Queen has completedhis doctoral thesis in astrophysics after taking a 30-year break to play someguitar.

Brian May's thesis examines the mysterious phenomenon knownas Zodiacal light, a misty diffuse cone of light that appears in the westernsky after sunset and in the eastern sky before sunrise. Casual observers, ifthey live under very dark rural skies, can best see the light two to threehours before sunrise as they look east, and many people have been fooled intoseeing it as the first sign of morning twilight. A Persian astronomer who livedaround the 12th century referred to it as "false dawn" in a poem.

Astronomers now know that Zodiacal light represents reflectedsunlight shining on scattered space debris clustered most densely near thesun. The millions of particles range in size from tiny asteroids tomicroscopic dust grains, and extend outward beyond the orbit of Mars.

May's work focuses on an instrument that recorded 250 scansof morning and evening Zodiacal light between 1971 and 1972. The Fabry-PerotSpectrometer is located at the Observatorio del Teide at Izana in Tenerife, thelargest of the Canary Islands.

The completed thesis appears as the book "A Survey ofRadial Velocities in the Zodiacal Dust Cloud" (Springer and CanopusPublishing Ltd., 2008).

"I have thoroughly enjoyed my years playing guitar andrecording music with Queen, but it's extremely gratifying to see thepublication of my thesis," May said. "I've been fascinated withastronomy for years, and I was happy to finally complete my Ph.D. last year andrecord my studies of the Zodiacal Light in this book."

May officially received hisdoctorate on Aug. 24, 2007, from the Imperial College in London. He alsogained the appointmentof chancellor for Liverpool John Moores University in November of thatyear, showing that he's not just any guitar hero.