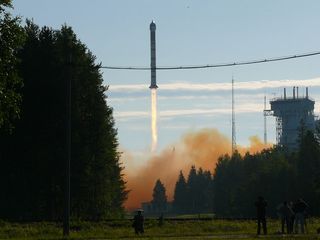 The capstone of a fleet ofGerman military satellites rocketed into space from Russia early Tuesday,completing a series of five launchings of spacecraft designed to scoutlocations around the world.

The 105-foot (32-meter) tallbooster tookoff from the Plesetsk Cosmodrome, a space base in far northern Russia nearthe Arctic Circle.

The rocket successfullyreleased SAR-Lupe 5 into an orbit 300 miles (482 km) high about a half-hourlater, according to OHB-System, the satellite's prime contractor.

Optical reconnaissancesatellites are hampered by weather and darkness, significantly reducing theireffectiveness in spying on enemy activity.

Imagery produced by theinstrument will show objects as small as three feet, according to OHB-System.

The German military, whichtook control of SAR-Lupe satellite operations in December, will use the systemfor the next ten years.

The SAR-Lupesystem is part of an international intelligence-sharing agreement betweenGermany and France. France will receive SAR-Lupe radar imagery and Germany willreceive data from the French Helios optical and infrared reconnaissance network.