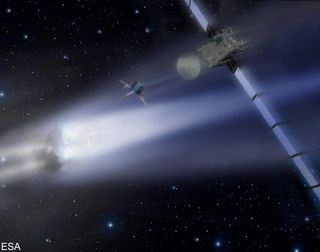 Rosetta - the comet chaser. An artist's depiction of Rosetta's arrival at its comet destination.
(Image: © ESA)

A comet-chasing spacecraft has been awoken during its years-long journey so it can study an asteroid it will fly past this September.

European Space Agency mission managers woke the Rosetta probe from hibernation to prepare for its encounter with asteroid Steins on Sept. 5, according to a statement this week. The robot's ultimate destination is comet 67/P Churyumov-Gerasimenko.

When it reaches asteroid Steins this year, Rosetta will be about twice as far from the sun as is Earth. The encounter will occur in the asteroid belt between Mars and Jupiter. The probe will come within 500 miles (800 kilometers) of the asteroid.

Asteroids are thought to be samples of our solar system as it was near the time of formation 4.5 billion years ago. Based on observations from Earth, Steins is composed mostly of silicates and basalts, material familiar on our planet. But scientists say it's a relatively rare asteroid type. Rosetta aims to learn more about its composition, rotation and how it interacts with the charged particles of the solar wind.

To prepare, mission officials will test the craft's instruments between now and Sept. 4.