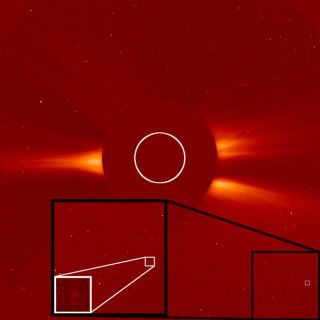 The ESA/NASA SOHO spacecraft has just discovered its 1500th comet, making it more successful than all other comet discoverers throughout history put together. SOHO’s record-breaking discovery was made on June 25 using the Large Angle and Spectrometric Coronograph (LASCO), one of 12 instruments on board.
(Image: © ESA/NASA/SOHO)

TheNASA/ESA Solar and Heliospheric Observatory made its historic discovery on June25, thanks to U.S.-based amateur astronomer Rob Matson. That puts SOHO?s countahead of all other discoverers of comets throughout history combined.

SOHOlaunched in 1995 to study solar physics and spaceweather, but its prime location between the sun and the Earth gives anexcellent view of the space inside Earth?s orbit. The spacecraft records cometsas they slowly lose ice and often disintegrate in orbit around the sun.

Volunteersand astronomers can pore over downloaded data from SOHO to try and find comets.Findings get checked by Battams and then passed on to the Minor Planet Center,where the comets get cataloged and have their orbits calculated.

Roughly85 percent of SOHO?s comet discoveries involve a collective of icy objects knownas the Kreutz group — fragments of a giant comet that disintegrated whileorbiting the sun centuries ago. The comet?s offspring now pass within 932,000miles (1.5 million km) of the sun, then are flung far out into the solar systemon highly elliptical orbits.