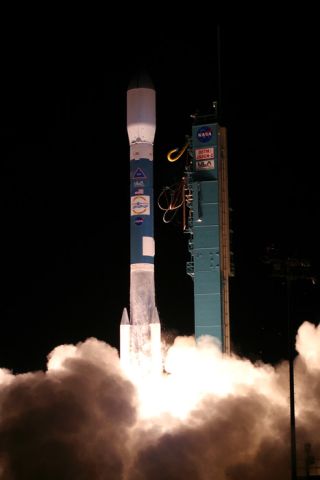 A ULA Delta 2 rocket launches the Jason 2 ocean-watching satellite from Vandenberg Air Force Base in California on June 20, 2008.
(Image: © ULA.)

PARIS — TheU.S.-European Jason-2 ocean altimetry satellite was launched successfully June20 aboard a Delta 2 rocket from Vandenberg Air Force Base, Calif., on afive-year mission to continue the uninterrupted study of ocean levels andcurrents that was begun in the early 1990s in a U.S.-French partnership.

The launchfeatured the use of a video camera mounted on the Delta 2 upper stage andtrained on the Jason-2satellite to beam live images of the satellite's separation from the rocketand the deployment of its two solar arrays.

NASAspokesman Alan Buis said that while a similar camera angle has been used oncebefore on a Delta 2 mission, the Jason-2 launch was the first time a live videostream from a Delta 2 captured solar-panel deployment.

Buildingupon the work of its Topex-Poseidon and Jason-1 predecessors, built for theFrench space agency, CNES, and NASA, Jason-2 has the added support of the U.S.and European meteorological agencies. The National Oceanic and AtmosphericAdministration (NOAA) and its European counterpart, the 21-nation Eumetsat,each made financial contributions to Jason-2, a demonstration of the increasingnumber of military and civil organizations that make regular use of ocean-altimetry.

The growingpopulation of Jason data users has made clear that, in order to justifyinvesting in future applications, it needs to be assured that there will be nointerruption of altimetry data. This remains a weak point in the Jason program.

Topex-Poseidonwas launched in 1992 on a mission designed to last between three and fiveyears. It ended up functioning for more than a decade, meaning the delays inthe launch of Jason-1 in 2001 did not cause gaps in data gathering.

Similarly,Jason-1 was designed to operate for five years but has remained healthy to thisday.

Jason-2also is designedto last five years, and as of now there is no firm decision on a Jason-3.NASA has said that, as a research agency, its job is not to produce multiplecopies of the same hardware. It will not be taking part in any future Jasonmissions.

CNES hasadopted the same view as NASA, but has said it has a spare model of the samesatellite platform used for Jason-2 and is willing to contribute that to aJason-3 effort. NOAA and Eumetsat have indicated they likely will supportJason-3 but have made no formal commitments.