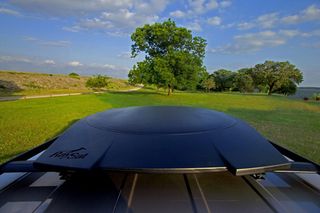 Two U.S. companies KVH Industries Inc. and RaySat Inc. have developed affordable, lightweight antennas, like the one shown mounted atop the roof of a van, that allows viewers to access satellite TV while on the road. Image
(Image: © RaySat)

With the advent of a new generation of relatively affordable mobile antennas, satellite television is about to jump from the living room to the back seats of vans, recreational vehicles and family cars.

A pair of U.S. companies, KVH Industries Inc. and RaySat Inc., either have systems on the market or plan to introduce one before the end of November.

KVH of Middletown, R.I., introduced its TracVision A5 low-profile antenna in September 2003. The system, based on hybrid phased-array technology, works exclusively with DirecTV's satellite system. The antenna was priced at $3,500 when it debuted but now sells for less than $2,000 in some areas, Christopher Watson, a KVH spokesman, said.

RaySat, Inc. of McLean, VA, plans to introduce its 5-centimeter-tall phased array satellite antenna before the end of November, said Samer Salameh, the company's president and chief executive officer. The antenna, which will work with DirecTV as well as EchoStar Communications Corp.'s DISH service and Cablevision Systems Corp.'s Voom, will sell for around $2,000, he said.

So while these early systems are about to hit store shelves, industry officials said it will still be a few more years before prices drop far enough for the technology to become a mass market product, officials said.

KVH, founded in 1978, got its start manufacturing a digital compass that was used by competitors in the America's Cup yacht race, Watson said. The technology eventually migrated into the military arena, where it was used for precisely pointing antennas aboard moving platforms, he said.

KVH moved its antenna pointing technology into the commercial market in the early 1990s, unveiling its first TracVision systems for large boats in 1995, Watson said. The move to the smaller automobile and sports utility vehicle market was a natural progression as smaller antennas developed, he said.

The TracVision A5 flat panel antenna spins on an axis in the same way a record moves on a turntable, Watson said. The movements allow the antenna to track the satellite signal automatically, and KVH has already received a patent for the technology and has several more pending, he said.

"This type of technology has been around for some time for airline and military use, but there is a pretty significant leap in technology" for automobiles, Watson said. "The antennas normally cost from several hundred thousand to millions of dollars. We had to develop a version that was suitable for use on a vehicle and at a cost that would be suitable for the automotive world. No one is going to put a $200,000 antenna on top of a $60,000" recreational vehicle.

Watson would not reveal how much automobile systems have contributed to KVH's overall revenues, but the company has shipped about 1,700 systems and is manufacturing more.

KVH currently has about 60,000 of its parabolic antennas aboard boats and recreations vehicles, but the potential market for automobiles dwarfs the other two areas, Watson said. Between 6,000 and 10,000 new boats, and 40,000 to 50,000 recreational vehicles are manufactured each year, he said. The automotive market can produce about 5.2 million mini-vans and sports utility vehicles, and about 30 percent come with video systems already installed.

According to a 2003 study by market research firm Frost & Sullivan, nearly 10 million vehicles could be equipped with video screens by 2007, and the market could be worth about $500 million.

Both KVH and RaySat currently distribute aftermarket versions of their antenna systems via independent retailers and also are seeking distribution deals with consumer electronic stores such as Best Buy and Circuit City, officials said. But to make real inroads into the market, the companies are seeking deals to have their antennas offered as factory-installed options by the automobile manufacturers.

"It is very important to pursue the deals with the automakers, because that's where you get into the true mass market," Watson said.

KVH and RaySat also are developing next-generation antennas, which promise to be even smaller and lighter than the current versions, and hopefully less expensive, another key component in capturing market share, officials said.

"Like all consumer electronics, you will have the early adopters," Salameh said. "That is a nice market, but the magic price is about $1,000, and I'm sure we can get there in the next few years."