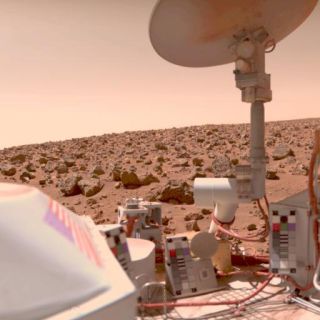 More than30 years ago, NASA's Viking life-detection experiments on Mars returnedinconclusive results, and controversy surrounds the Viking data to this day.

The Phoenix mission now on Mars may collect data that will help answer questions raised byViking, but to do so researchers will need to be able to spot the differencebetween chemical and biological signatures on Mars.

In the mid1970s, NASA's VikingLanders analyzed material from the Martian surface in the hopes of findingsignatures of life. The Viking life-detection experiments indicated the presenceof oxidized organic material near the surface. At first, researchers on theinstrument team believed this was evidence of biological activity on Mars.

However,other scientists immediately criticized the results. Eventually, the scientificcommunity decided that it was more likely the organic material had beenoxidized by the chemical hydrogenperoxide, which was detected at the surface by the Viking Gas Exchangeexperiment.

Noteveryone is satisfied with this explanation. There are still questions aboutwhere hydrogen peroxide on Mars comes from, how long it can naturally remainstable at the surface and how much is actually present.

An answermay be on the horizon.

NASA's PhoenixLander touched down on Mars on May 25. Onboard is an instrument called theThermal and Evolved Gas Analyzer (TEGA), which will be used to analyze soil andice samples on Mars. The instrument could help explain the puzzling Vikingresults.

In order toprepare for the Phoenix experiments, a team of researchers performed a seriesof tests. They simulated the experiments to be conducted by Phoenix todetermine what the results would look like if microbes were present in martiansoil. Researchers inoculated simulated martian soil with known Earth-organismsthat can survive in the presence of hydrogen peroxide. (On Earth, some microbesproduce hydrogen peroxide and others are able to utilize it.)

By testingthe simulant Martian soil with the TEGA instrument, the research team was ableto identify signatures that indicated microbes. Specific chemicals that can bedetected by TEGA can now serve as biomarkers for possible life on Mars.

Thesimulated experiments provide an important test for chemical versus biologicalresponses in the Phoenix mission. In other words, the Phoenix mission couldprovide definitive answers to the questions posed by Viking, and may even tellus if life exists on Mars.

The research was published in the April 2008 edition of the journal Astrobiology under lead author Dirk Shulze-Makuch.