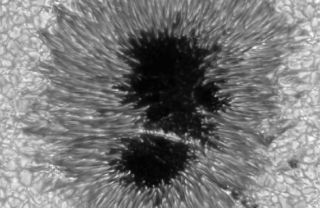 An image of a sunspot the size of the Earth, taken with the Swedish Solar Telescope.
(Image: © Dr. Vasily Zakharov/Max Planck Institute for Solar System Research)

The sun's surface has been fairly blank for the last couple of years, and that has some worried that it may be entering another Maunder minimum, the sun's 50-year abstinence from sunspots, which some scientists have linked to the Little Ice Age of the 17th century.

Could a new sunspot drought plunge us into another decades-long cold spell?

It's not very likely, says David Hathaway a solar physicist at NASA's Marshall Space Flight Center in Huntsville, Ala.

The question came up after an international solar conference held last week at Montana State University, where scientists discussed the dearth of solar activity in the last couple years.

"It continues to be dead," said Saku Tsuneta with the National Astronomical Observatory of Japan and program manager for the Hinode solar mission. "That's a small concern, a very small concern," because the period of inactivity seems to be going on longer than normal. Some scientists think such inactive periods, such as the Maunder minimum, are responsible for cold spells in the past, such as the Little Ice Age.

The sun's energy drives all climate and weather on Earth. And Hathaway does agree there are good indications that fluctuations in solar output related to sunspot cycles influence the Earth's climate. And the Maunder minimum isn't the only evidence — scientists have linked two smaller sunspot minimums (periods of time with very few sunspots) in the early 19th century to cold spells, as well as periods before the Maunder minimum deduced from tree ring records, he said.

But the sun isn't the only thing that influences our climate: volcanic eruptions, large-scale phenomena such as El Nino, and, more recently, the accumulation of greenhouse gases in the atmosphere also affect the global climate.

Prior to the industrial revolution, the sun probably accounted for about 10 to 30 percent of climate variability, Hathaway told SPACE.com, but now that greenhouse gases have started to build up, "the sun's contribution is getting smaller and smaller," he added.

Solar cycles are the ebb and flow of the sun's magnetic activity over a roughly 11-year period, which affects the formation of solar features such as solar flares and sunspots. Sunspots are cooler, dimmer areas on the sun's surface.

The last solar cycle, which peaked in 2001, was a particularly intense one, with an upsurge in solar storms between 2000 and 2002. Such intense activity in the peak of the solar cycle tends to lead to less activity at the end of the cycle.

Signs of the current, new solar cycle (which actually overlaps with the last cycle) showed up in November 2006, and its first sunspots were seen in January of this year, and again in April, Hathaway said. So already that rules out another Maunder minimum, Hathaway says, since this solar cycle has already begun producing spots, even if there haven't been many of them yet.

This cycle is just simply "off to a slow start," Hathaway said.

The last three solar cycles were also what Hathaway calls "big cycles," meaning they had more than the average number of sunspots (the average is around 110 to 120 sunspots on any given day during the cycle?s maximum). It?s not unusual for such a spate of prolific cycles to be followed my more muted solar cycles (such as the cycle that preceded the last three biggies).

Hathaway says that solar physicists are divided on their predictions of this new solar cycle — some say it will be small, others say it will be another doozy. Predictions have ranged anywhere from 75 to 150 maximum spots during its peak. "There really are two camps," Hathaway said. Whatever the number ends up being, though, "it's not zero," he added.

Why the sun is so fickle in its sunspot production is still something of a quandary. "We still don't fully understand how the sun does this," Hathaway noted.

Scientists do know that two processes on the sun influence sunspot activity. The first is the strength of the shear zone (which lies at the base of the sun's convection zone, about 30 percent of the way inside the sun).

The shear zone can stretch out the sun's magnetic fields, which then affect the strength of the solar cycle, and thus the number of sunspots. The second process, called the meridional circulation, describes the flow of stellar material from the equator toward the poles and back again, and it can also influence the cycle's strength.

Towards the end of the last solar cycle, for example, "that flow seemed to have slowed down quite a bit," weakening the cycle and reducing the number of sunspots, Hathaway said. "It's the slowest we've ever seen," he added.

So based on the nearly 400-year record of sunspots that scientists have, this slow start isn't unusual. "It's just taking its merry old time," Hathaway said.

(His personal prediction is that sunspot activity will start to pick up in the next few months. 'I keep looking everyday," he said.)

Though there is debate about how and whether the Maunder minimum actually caused the Little Ice Age, scientists have proposed a few hypotheses as to how it could have done so.

One idea springs from the fact that the sun emits much more ultraviolet radiation when it is covered in sunspots, which can affect the chemistry of Earth's atmosphere. The other is that when the sun is active, it produces tangled magnetic fields that keep out galactic cosmic rays. Some scientists have proposed that a lack of sunspots means these cosmic rays are bombarding Earth and creating clouds, which can help cool the planet's surface.

But these ideas aren't yet proven, and anyway, the sun's contribution is small compared to volcanoes, El Nino and greenhouse gases, Hathaway notes.

Even if there were another Maunder minimum, he says, we would still suffer the effects of greenhouse gases and the Earth's climate would remain warm. "It doesn't overpower them at all," Hathaway said.