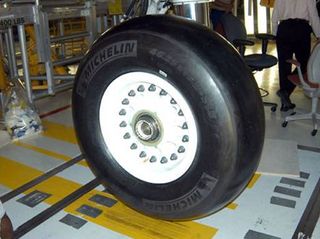 A space shuttle main landing gear tire is prepared for its first and only space flight at the Kennedy Space Center in Florida.
(Image: © NASA)

When spaceshuttle Discovery touched down in December 2006 after spending 13 days in spacetraveling 5.3 million miles, it came to rest on four main landing gear and twonose gear tires. Although not much larger than a truck tire, just one ofDiscovery's main gear tires could carry three times the load of a Boeing 747tire or the entire starting line-up of a NASCAR race — 40 race cars — allhitting the pavement at 250 miles per hour.

The reartires that brought the STS-116crew to their safe end of mission, like all orbiter main gear tires, were ratedfor only one use and were replaced before Discovery flew again nearly a yearlater. The orbiter's nose gear met the same fate after only their secondlanding.

Discovery'sspent tires and those of 50 other past flights dating as far back as 1986 weremoved to NASA surplus yards and storage centers. The Kennedy Space Center in Florida began the process to auction more than 60 of the retired tires asscrap in February 2005 before the agency reconsidered and pulled the tires fromthe sale. Instead, NASA said, they would be set aside for then-unspecified"outreach and educational activities."

Three yearslater, NASA announced lastweek their flown tires' fate: they would be rolled out as the pilot for anew artifact loan program targeted at museums, planetariums, and otherorganizations.

Prior tothe new Artifact Loan Opportunities Program, the space agency made its spentspace-flown items available to the Smithsonianand to other museums. Educational institutions could borrow artifacts for shortterm display or in-classroom use but long-term loans were primarily only availableto credentialed museums that could satisfy the preservation requirements set byNASA.

Given theample supply of shuttle tires and the desire to reach new audiences, NASA hasinvited proposals for the long-term loan of the tires by organizations traditionallyexcluded from such programs, such as civic groups and schools. To facilitatethe process, the agency has waived some of their requirements for the care of flownartifacts, permitting outdoor display as well as the option to drill orcut, as well as paint the tires, though whether intact or in pieces, all thematerial will remain the property of NASA.

To qualifyfor a three-year renewable loan, organizations need to submit a proposal byJune 11 as well as provide proof of insurance in case of loss for the retailvalue set by NASA of $250 per tire. Due to U.S. State Department regulations,the tires may not leave the country.

Theorganization must also provide a guarantee to cover the shipping costsassociated with the transportation of the tires, which average a weight of 500pounds and are approximately 3.5 feet in diameter, from either Florida or Washington, DC.

In additionto the STS-116 tires, NASA also has listed as available tires from the 2005"Return To Flight" mission of STS-114; the 1998 STS-88 flight, whichgave birth to the InternationalSpace Station; STS-95, that featured former U.S. Senator John Glenn'sreturn to space after 36 years; and STS-61C, that landed 10 days before theloss during launch of space shuttle Challenger in 1986, among many other tiresfrom other missions.

Accordingto the program'swebsite, loans will be awarded on the basis of the creative and innovativemerit of the proposal, past experience, technical knowledge, outreachpotential, educational potential, both fiscal and schedule soundness, alignmentwith NASA's educational goals and the attraction of "nontraditional"audiences.

NASAestimates the announcement of the granted loans will be made on or around July18, 2008.

Though NASAhas yet to announce additional artifacts it may make available through theprogram, the agency is preparing for the 2010 scheduled retirement of the spaceshuttle fleet, which accounts for hundreds of thousands of items beyond thethree remaining vehicles themselves.