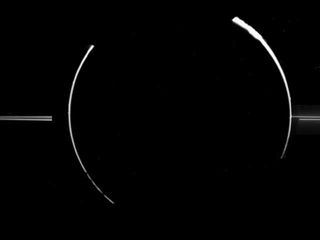 An eclipse of the sun by Jupiter, as viewed from Galileo, reveals the rings. Small dust particles high in Jupiter's atmosphere, as well as the dust particles that compose the rings, can be seen by reflected sunlight.
(Image: © NASA, JPL, Galileo Project, (NOAO), J. Burns (Cornell) et al.)

Jupiter has a thin set of nearly imperceptible rings with features that have long puzzled scientists. A new study reveals how light and shadow are at work there, solving several mysteries at once.

Nowhere near as visible as the rings of Saturn, which are icy and bright and contain many chunks as big as houses, Jupiter's rings are made mostly of dark dust. They were discovered in 1979 by Voyager 1. Not until the Galileo spacecraft, orbiting Jupiter from 1995 to 2003, did scientists figure out the rings were made of dust kicked up by meteoroids slamming into Jupiter's inner moons.

Yet oddities remained that didn't match theoretical predictions: The rings protrude beyond the orbit of the moon Thebe, and part of the ring system is tilted compared to the main ring plane.

Alternating light and shadow cause these anomalies, the new research finds.

"As they orbit about the planet, dust grains in the rings alternately discharge and charge when they pass through the planet's shadow," explained astronomer Douglas Hamilton of the University of Maryland. "These systematic variations in dust particle electric charges interact with the planet's powerful magnetic field.

Small dust particles are pushed beyond the ring's expected outer boundary, and very small grains "even change their inclination, or orbital orientation, to the planet," Hamilton said.

The ring oddities are "made in the shade," he quipped.

The findings are detailed in the May 1 issue of the journal Nature.

Hamilton and German co-author Harald  Kruger studied impact data on dust grain sizes, speeds and orbital orientations taken by Galileo as it crossed the rings in preparation for its deliberate death plunge into the planet. Kruger analyzed the new data set and Hamilton created computer models that matched dust and imaging data on Jupiter's rings and explained the observed eccentricities.

"Within our model we can explain all essential structures of the dust ring we observed," Kruger said.

The new understanding can be applied to the rings of Saturn, Uranus and Neptune, too, but the effects are more pronounced around Jupiter, the researchers say.

"The icy particles in Saturn's famous rings are too large and heavy to be significantly shaped by this process, which is why similar anomalies are not seen there," Hamilton said. "Our findings on the effects of shadow may also shed some light on aspects of planetary formation because electrically charged dust particles must somehow combine into larger bodies from which splanets and moons are ultimately formed."