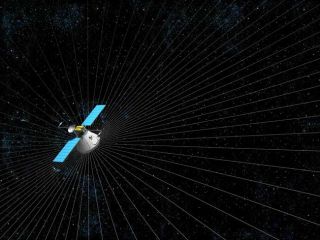 An artist concept of the solar sail. The center package contains the solar panels powering an electron gun that keeps the many tethers charged.
(Image: © Allt om vetenskap)

An electrically-charged solar sail with a possible"turbo" option may be ready for its first space trials in three yearsif scientists in Finland have their way.

The Finnish invention would use long, positively-chargedtethers to ride the solar wind, without the need for any sort of fuel orpropellant.

"A flight out of the solar system to measure the gas,dust, plasma and magnetic field in the undisturbed interstellar space wouldperhaps be the 'flagship' thing to do," said PekkaJanhunen, a researcher developing the sail at the Finnish MeteorologicalInstitute.

The solar sail's debut would involve a smaller model with 5-mile(8-km) long tethers riding in a high elliptical Earth orbit. That would allowJanhunen and others to gauge the force of the solar wind on the spacecraft withan accelerometer.

"The mission would validate and calibrate our theoryand enable us to design full-scale missions with accurate and experimentallyverified numbers for predicted thrust," Janhunen added.

Two solar panels would power an electron gun that keeps thespacecraft tethers charged, creating propulsion from the similarly chargedsolar wind pushing against the sail. Researchers are looking into aluminum orcopper alloy wires for the tethers.

The maiden mission would also test a concept to increase thethrust from the solar wind, called radio frequency electron heating.

The subscale mission would also test a "turbo"charge for the solar sail. Radio-frequency waves could excite the solar windparticles through electron heating, which might boost the thrust created. Theconcept is difficult to simulate or analyze in theory, but should be easy totest in space, according to Janhunen.

Whether the first test gets off the ground depends onsecuring almost $8 million USD (5 million euros). Researchers from Finland,Germany, Sweden, Russia, and Italy are currently developing various componentsof the solar sail.

Previous efforts to deploy and test solar sails foundereddue to launch failures and mishaps. A joint Russian-U.S.effort in 2005 was doomed by rocketbooster failure less than two minutes after launch. Two previous Russianefforts in 2001 and 1999 also failed, though Japan successfully deployed asmall solar sail prototype in 2004.

Other sail concepts have suggested using microwavesbeamed from Earth to push spacecraft up to record speeds, instead of ridingthe solar wind.

However, a successful solar sail could have big payoffs bymaking deep space missions cheaper without fuel requirements. A fleet of solarsail spacecraft could also significantly lower the cost of transportingmaterial within the solar system.

"Fetching water ice from asteroids to produce rocketpropellant on Earth orbit would probably be one sensible application of thatcapability," Janhunen told SPACE.com. "Producing rocket fuelon orbit means that one doesn't have to lift it from Earth, which could makeall space activities cheaper - except for those in low-Earth orbit."

Solar sails alone will not pave the way for further spaceexploration ? other developments such as cheaper and more reusable launchvehicles are necessary. But proving solar sail technology would help extendmankind's reach into the solar system.

"Starting the long-awaited asteroid resource utilizationcould be significant for the longer-term well-being and survival of our civilizationon this planet," Janhunen said.