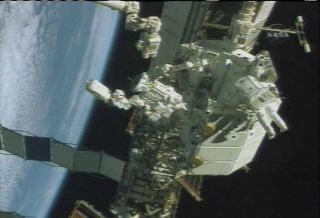 Endeavour astronaut Robert Behnken works on the maintenance robot Dextre at the ISS during a March 17, 2008 spacewalk high above Earth, the third of NASA's STS-123 mission.
(Image: © NASA TV.)

?Happy St.Patrick?s Day guys and have a great EVA,? said astronaut Mike Foreman, usingNASA?s term for a spacewalk as he choreographed the excursion from insideEndeavour.

Linnehanand Behnken outfittedDextre with a three-tool kit designed to allow the $209-million robot torelease latches and locks, remove bolts and grasp broken station batteries andother hardware outside the ISS. They also gave the 12-foot (3.7-meter) tallrobot a set of camera eyes and lights, as well as a 6-foot (almost 2-meter)long boom to hold spare parts and tools during trips to and from work sites.

Thespacewalk marked the third in a series to complete the 3,440-pound(1,560-kilogram) robot?s construction after astronauts attached its hand-likegrippers and 11-foot (3.4-meter) arms in twoearlier excursions. Built by the Canadian Space Agency, the Dextre launchedto the ISS in nine separate pieces attached to a cargo pallet in Endeavour?scargo bay. The fully assembled automaton is due to be moved to the exterior ofthe station?s U.S. Destiny laboratory late Tuesday.

In additionto their Dextre work, Linnehan and Behnken deliveredspare parts for the station?s Canadarm2 robotic arm and electrical powergrid to an exterior storage platform. But a stubborn materials exposureexperiment resisted repeated attempts by Behnken to secure it in place outsidethe space station?s European-built Columbus lab.

ZebulonScoville, lead spacewalk officer for Endeavour?s flight, said theexperiment?s anchoring pins appeared to be too fat for their allotted slots.

Engineersare studying potential fixes for the suitcase-sized experiment, which may include simply tyingit down with tethers during one of the next two spacewalks, scheduled for Thursdayand Saturday, respectively. Aside from the balky pins, the spacewalk wentextremely well, mission managers said.

?This reallywas the kind of spacewalk that, when it?s all done, you just want to put yourhands up in the air and howl at the moon,? Scoville said. ?It really was agreat day for us.?

While thetwo spacewalkers toiled outside the ISS, their crewmates inside the stationwere hard at work in the station?s new JapaneseLogistics Pressurized module. Endeavour astronauts delivered the small, attic-likeroom - the first piece of Japan?s massive Kibo laboratory - last week.

By the endof Monday?s overnight excursion, Behnken racked up six hours and 53 minutes ofspacewalking time as he makes his first spaceflight. Linnehan, now on hisfourth spaceflight, ended with a grand total of 42 hours and 24 minutes ofspacewalking time across four spaceflights. Linnehan, who performed three ofhis six spacewalks during Endeavour?s current STS-123 mission, now ranks 11thon the list of the world?s most experienced spacewalkers.

Bycoincidence, the spacewalkers ended their orbital work on the 43rd anniversaryof the first spacewalk in history; a 12-minute excursion by cosmonaut AlexeiLeonov on March 18, 1965.

?I think Ijust maybe saw the Southern Cross, and definitely a satellite flying over,?said Linnehan as he gazed out into space from the tip of the station's robotarm. ?Two satellites, three satellites, wow.?