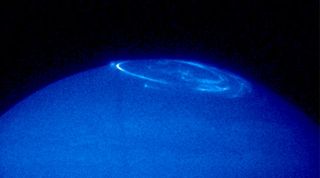 Hubble Space Telescope ultraviolet image of the northern pole of Jupiter. Among many other auroral structures, the Io footprint is the most equator-ward feature close to the centre of the image. This spot is always located close to the feet of the magnetic field lines connected to the satellite Io.
(Image: © LPAP/Université de Liège)

Iois the most volcanic body in the solar system, with its entire surface likelymade up of lava from the moon's hundreds of volcanoes.

Ioalso causes glowing spotshundreds of miles across on its mother planet that are similar to the auroraborealis or northern lights in the Northern Hemisphere on Earth.

AsJupiter spins, its magnetic field sweeps past Io, stripping off roughly 1 ton(about 1,000 kilograms) of matter off Io every second. This matter becomeselectrically charged plasma in the magnetic field, forming a doughnut-shapedcloud. As Io orbits the planet, plasma surges around it like rivers do aroundboulders, creating waves that blast Jupiter's atmosphere with electrons tocreate auroras.

Theglowing spots on Jupiterare typically located downstream of the flow of charged particles from theplasma torus. Now a team of planetologists unexpectedly found auroras occurringupstream of this flow.

"Theresults are surprising because no theory predicted upstream spots," saidresearcher Bertrand Bonfond of the University of Liege in Belgium.

Bonfondand colleagues in Belgium and Germany saw these new spots by using the HubbleSpace Telescope to observe Jupiter in ultraviolet wavelengths.

>Theresearchers think interactions between Ioand Jupiter cause electrons to curve from one hemisphere of the planet aroundthe moon to the other hemisphere, creating these unexpected spots, Bonfond toldSPACE.com.

These new findings could shed light on very common occurrences in the universe? when electrically conductive bodies such as Io orbit near magnetic bodiessuch as Jupiter. For example, some recently discovered exoplanets are thoughtto be in such configurations with their parent stars.

Tofurther test their new theory of how these glowing spots form, Bonfond and hiscolleagues plan further observations of the auroras later this year, afterscheduled repairs and improvements to Hubble are made.

The scientists detailed their findings online March 15 in the journal GeophysicalResearch Letters.