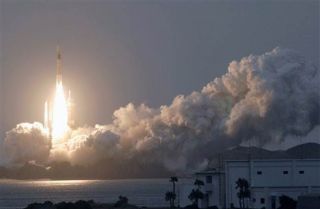 A cutting-edge Japanesesatellite was hurled into orbit Saturday, beginning a mission to plant theseeds for a space-based infrastructure to spread access to information inremote corners of the Far East and Southeast Asia.

"The purpose of WINDSis to develop and demonstrate technology to establish the world's most advancedinformation society," said Yasuo Nakamura, the mission's project manager.

The craft was driven intospace atop an H-2A rocket launched from the Yoshinobu complex on TanegashimaIsland at the southern end of the Japanese archipelago. The orange and whitelauncher, fitted with two large solid rocket boosters and four smaller strap-onmotors, bolted into the sky at 0855 GMT (3:55 a.m. EST) Saturday.

Liftoff slipped to the endof the day's window because of a boat in a downrange restricted zone andpersistent high winds that reached nearly 40 miles per hour. The gusts finallydied down enough for engineers to clear the rocket for flight shortly after sunset.

The rocket arced eastwardfrom Tanegashima, shedding its boosters and nose cone before its first stageexhausted its supply of cryogenic propellant about six-and-a-half minutes afterliftoff. The H-2A's second stage fired twice to inject the WINDS payload intoits targeted orbit, and live video from the rocket showed spacecraft separationat the 28-minute mark in the mission.

Nicknamed Kizuna, the10,692-pound satellite was expected to be released in an orbit with a highpoint of 22,354 miles and a low point of 155 miles. The geosynchronous transferorbit should have an inclination of 28.5 degrees, according to prelaunchestimates.

The flight was delayed fromFeb. 15 to give technicians time to resolve a problem with an attitude controlthruster on the rocket's second stage. Officials ordered the replacement of afaulty part before pressing ahead with final preparations.

Kizuna will use its ownpropulsion module to gradually boost its orbit to an altitude of approximately22,300 miles and reduce its inclination to zero degrees to enter geosynchronousorbit, where the craft's velocity will match the speed of Earth's rotation. Kizunawill be permanently parked above the equator at 143 degrees east longitude, orabove the Pacific Ocean north of New Guinea.

Built by Mitsubishi HeavyIndustries Ltd., the satellite will deploy its antennas and complete fourmonths of systems testing before its demonstrations begin in July.

The $484 million five-yearmission is the first step in a government-led demonstration of technologiesthat could revolutionize Internet-based communications. JAXA is fronting mostof the mission's funding, with the National Institute of Information andCommunications Technology providing the remaining $56 million, according to aJAXA spokesperson.

The name Kizuna, whichmeans "ties between people," was selected from suggestions submittedby the public.

Kizuna features two7.9-foot Ka-band dish reflectors attached to a multi-beam antenna designed toserve locales across Asia. One dish will focus on nine regions in Japan, plusparts of Korea, Beijing and Shanghai. Another reflector will reach a broaderswath of the Asia-Pacific.

Individuals with 1.5-footantennas can also receive a sizable boost in communications speeds throughKizuna. Those dishes will be able to receive information at a rate of 155megabytes per second, faster than commercial fiber-optic networks.

Ka-band frequencies aretypically hindered by rain, but Kizuna's multi-beam antenna can allocate itspower capacity to regions based on both weather conditions and real-timedemand. This provides a level of flexibility unmatched by most currentcommunications satellites, JAXA officials said.

"It will allocatepower efficiently by sending a stronger signal to a rainy region, and a weakersignal to a sunny region," Nakamura said.

Kizuna also carries aKa-band phased array antenna with an arrangement of transmitters and receiverscapable of rapidly changing coverage zones to respond to demand.

The phased array antennawill reach an area stretching from the central Pacific to India, opening upone-third of the planet to Kizuna's communications experiments.

A switchboard-like deviceaboard Kizuna can instantly route uplinked messages to their intendeddestinations, a notable departure from most communications satellites thatrequire help from the ground.

Kizuna will begintechnology experiments in July with extensive testing of its communicationspayload to assess its ability to support subsequent demonstrations. By October,engineers expect to kick off a series of advanced experiments.

"Although the Internetis very popular in urban areas, connectivity is not yet sufficient in manymountainous regions, on remote islands, or in Asian countries where thecommunications infrastructure is not well developed," Nakamura said."(Kizuna) can make advanced high-speed communications available even insuch areas."

Officials will also testthe viability of the system for use in disasters that may dissolve terrestrialnetworks. Kizuna's antennas will link up with small mobile stations anddemonstrate replacing a severed backbone Internet line to prove asatellite-based communications system can step in if tragedy strikes.

"Even if communicationnetworks are disrupted and electricity lines are down, an Internet connectioncan be easily set up anywhere," Nakamura said.

Kizuna will alsodemonstrate multicasting between teachers and students in a distance learningprogram. Multicasting using Kizuna will facilitate more interactivecommunications among remote classes, according to Nakamura.

Kizuna will conduct 53other experiments selected from private proposals for the remainder of itsmission.

"We'd like to explorethe entire potential of (Kizuna) as we ensure the success of all theseexperiments," Nakamura said.

The next flight of the H-2Arocket will launch GOSAT, a satellite to measure the amount of harmfulgreenhouse gases in Earth's atmosphere. That mission is scheduled for launchthis fall.