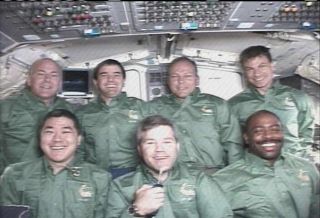 CAPECANAVERAL, Fla. — NASA?s shuttle Atlantis and seven astronauts are poised toreturn to Earth today to wrap up a nearly two-week mission that added a newEuropean lab to the International Space Station (ISS).

Atlantiscommander Stephen Frick and his six shuttle crewmates are due to land here atNASA?s Kennedy Space Center (KSC) at 9:07 a.m. EST (1407 GMT), where forecasts predictfair weather for their Earth return. A backup runway at California?s EdwardsAir Force Base is also available, though NASA and Atlantis astronauts arehoping for a Florida touchdown.

?We?d verymuch like to land at Kennedy,? Frick told ABC News Tuesday, adding his crew?sfamilies and friends will be waiting at the shuttle?s Florida runway. ?We?revery excited to see our families. We miss them very much and are looking forward to getting home.?

Atlantis?STS-122 crew is completing a 13-day constructionflight to the ISS, where astronauts swapped out one crewmember and deliveredthe 10-tonColumbus laboratory for the European Space Agency (ESA).

Tani?sjoined the space station?s crew in late October, but his mission was extendedtwo extra months due to launch delays for Atlantis in December. He said he is eagerto seeing his wife Jane and young daughters Keiko and Lilly after returning toEarth, as well as feeling the familiar downward tug of Earth?s gravity.

?There aretimes in the day that you really miss gravity,? Tani told CNN. ?Putting thingsdown and not losing them, and food on a plate where it doesn?t fly around soyou have to chase it around the room, those are things I?m looking forward to.?

NASA roused the crew today at 12:55 a.m. EST (0555 GMT) with the song "Hail to the Spirit of Liberty" by John Philip Sousa, a tune chosen specifically for Poindexter by his family.

"We're really looking forward to entry day today and landing on the first [revolution]," Poindexter said as he thanked his wife Lisa and two sons. "We're ready to get to work."

NASA alsoactivated its backup runway at Edwards Air Force Base in California?s MojaveDesert, where landing opportunities arise at 12:12:31 p.m. EST (1712:31 GMT)and 1:47:34 p.m. EST (1847:34 GMT). The space agency called up the alternatelanding strip to give Atlantis more options for a Wednesday return. The U.S.military is waiting for the orbiter?s landing before it attempts to shoot down adead spy satellite the size of a bus before it crashes to Earth with ahalf-ton of toxic rocket fuel.

Because ofAtlantis? limited water supplies to cool its systems and the length of theshuttle crew?s day, NASA flight director Bryan Lunney said he would onlyattempt three of the four consecutive landing opportunities today. With weatherforecasts predicting favorable conditions over the Shuttle Landing Facilityhere at KSC, Lunney said he was inclined to try twice for Florida beforeshifting to the first California window.

?That soundslike a great day to land in Florida,? Frick radioed to Mission Control.