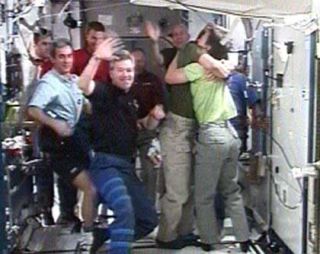 HOUSTON —With warm words and embraces, the seven astronauts of NASA?s shuttle Atlantis bidfarewell to their counterparts aboard the International Space Station (ISS)Sunday as they prepare to head home after delivering a new European lab.

Shuttle commanderStephen Frick and his crewmates said their goodbyes to the station?s three-personcrew after a busy week installing the new 10-ton Columbus laboratory andferrying a new crewmember to the orbiting outpost.

?It?s anamazing place, vastly different than when we were last up here,? said Frick,who last visited the station with STS-122 crewmate Rex Walheim in 2002, duringa farewell ceremony. ?We were privileged to bring up the European Columbusmodule.?

Duringtheir time on station, Atlantis astronauts attached the European Space Agency?s(ESA) Columbuslab to the station?s hub-like Harmony node and outfitted it with experimentsduring three spacewalks. They will undock early Monday for a planned landing onWednesday morning.

But before astronautsshut the hatches between their spacecraft at 1:03 p.m. EST (1803 GMT), they madesure to replace U.S. astronaut Dan Tani with ESAastronaut Leopold Eyharts, of France, as Expedition 16 flight engineers.

The hatchclosure will mark a milestone for NASA astronaut Dan Tani, whom Eyhartsreplaced as an ISS Expedition 16 flight engineer. Tani will return to Earthaboard Atlantis after spending two extra months in space due to the shuttleflight?s delays.

?It?s agreat day for me,? said Tani, who arrived at the station in late October andwill return home aboard Atlantis.

Delays toAtlantis? launch attempts in December extended his flight by two extra months,during which time his 90-year-old mother Rose died in a car accident outside ofChicago.

?The otherthing I was thinking about is my mother?my inspiration,? a tearful Tanisaid, adding that he?s looking forward to seeing wife Jane and two daughtersafter landing. ?Jane is the love of my life and she had the hard work while Iwas having fun.?

Atlantisastronauts and the station?s Expedition 16 crew spent their final hours ofjoint work wrapping up the outfitting of the ESA?s 1.4 billion euro ($2billion) Columbus laboratory and packing up cargo for the trip back to Earth.

?I have afeeling of a very big sense of accomplishment,? said Eyharts, who will completeColumbus' commissioning during his month-long stay on the station. ?We have areally international space station.?

Tani saidhe is leaving some notes aboard the station for future crewmembers, includingadvice on how to handlea family tragedy like the death of his mother.

?Living up here is just fantastic and I?m going to miss floating and I?m goingto miss looking out the window,? Tani said last week. ?I?m just packing andmaking sure that I don?t forget anything.?

They pumpedabout 90 pounds (41 kg) of oxygen from Atlantis to high-pressure tanks aboardthe station for use in future spacewalks and will return about 2,040 pounds (925kg) — the most ever tucked aboard a shuttle's middeck — back to Earth, he added.

Atlantisfired its rocket engines for about 36 minutes early Saturday to raise the spacestation?s orbit by about 1.24 miles (2 km), boosting its speed by about 1.6meters per second, or about 3.5 mph. The maneuver left the station at analtitude of about 210 miles (337 km) and in a better position to receive NASA?sshuttle Endeavour next month on another construction flight next month, as wellas a Russian Soyuz spacecraft to launch on April 8.

?All the systemson the orbiter continue to function well,? Dempsey said.

The spaceagency will also activate a backup runway at California?s Edwards Air ForceBase to give Atlantis an extra landing opportunity on Wednesday to clear theway for the U.S. military to shootdown a failing spy satellite laden with toxic rocket fuel before it entersthe Earth?s atmosphere.