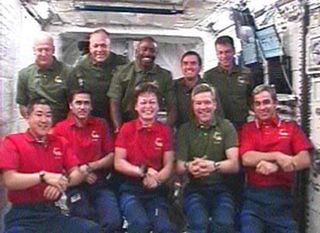 The STS-122 and Expedition 16 crews gather together for a joint crew news conference on Saturday.
(Image: © NASA TV)

HOUSTON — Astronautsaboard the shuttle Atlantis and the International Space Station (ISS) saidSaturday that a plan to shoot down an ailing spy satellite poses no threat to theirmission to install a European laboratory.

Shuttlecommander Stephen Frick and ISS commander Peggy Whitson said both of theirspacecraft will be safely out of harm?s way when the U.S. Department of Defense(DoD) launches a missile to destroy the fallingsatellite just before it enters the Earth?s atmosphere.

?We?regoing to be safely on the ground before they take any action and the satellite isgoing to be well below the space station, so we don?t expect any problems,?Frick told reporters via a space-to-ground video link.

Pentagonofficials said Thursday that they will wait until after Atlantis? Feb. 20landing before shooting the classified satellite down with a U.S Navy missile. NASAmission managers will also callup a backup runway to give Atlantis more landing attempts Wednesday.

Themassive, bus-sized satellite is loaded with toxic fuel that poses a hazard to peopleon Earth should it survive reentry, they said. But debris from the space shotshould circle the Earth much lower than the station?s 215-mile (346-km) orbit,NASA and military officials have said.

?I thinkNASA and the DoD loves the station crew as much as they love the shuttle,? jokedstation commander Peggy Whitson. ?So, no we?re not worried about it either.?

Frick andhis six STS-122 crewmates are in the homestretch of a13-day mission to deliver the European Space Agency?s (ESA) Columbuslaboratory and a new crewmate to the ISS. The shuttle crew is due to undockfrom the space station early Monday.

?It?s goingto be tough leaving here, but obviously I want to get back and see my family,?Tani said, adding that he also looks forward to eating food off a plate andspitting his toothpaste into a sink rather than swallowing it. ?I?m lookingforward a few odd things.?

Poindexter andMelvin said they?ve enjoyed floating in space and working alongside their comrades,while Love has taken in a new perspective of his home planet during his twospacewalks.

?As an astronomer,you get used to planets as sort of abstraction,? said Love, a trained physicistand astronomer, adding that looking down on Earth has redefined the planet. ?It?sjust an awe-inspiring experience. You have no idea what the word ?planet?really means until you?ve seen that.?