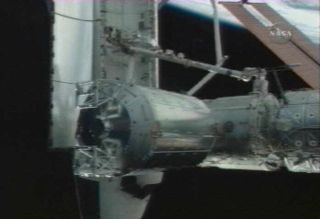 HOUSTON —NASA will call up a backup landing strip for the space shuttle Atlantis nextweek to give the U.S. military more leeway to shoot down an ailing spy satellite,mission managers said Friday.

The spaceagency will activate a backup runway at California?s Edwards Air Force Base onFeb. 20 in addition to the shuttle?s primary landing site at the Kennedy SpaceCenter (KSC) in Cape Canaveral, Fla., to give the U.S. Navy the largest windowpossible in which to launch a missileat the dead satellite, said Sally Davis, lead space station flight director forthe shuttle flight.

?We?regoing to open up Dryden at the Edwards Air Force Base to ensure that we land atthe earliest opportunity, Davis told reporters as she read a NASA statementhere at the Johnson Space Center. ?The reason is to give the military the biggestpossible window and maximum flexibility to ensure the success of the satellite intercept.?

Pentagonofficials announced Thursday that it plans to fire a StandardMissile 3 from a U.S. Navy Aegis ship in the days following Atlantis? landingto destroy a U.S. reconnaissance satellite before it crashes to Earth.

?Sowe're going to bring the shuttle down before we even consider this option,? U.S. Marine Corps Gen. JamesCartwright, vice chairman of the Joint Chiefs of Staff, said during theThursday announcement. ?

The classifiedNational Reconnaissance Office satellite weighs 5,015 pounds (2,275 kilograms)and is about the size of a bus. It launched in December 2006, but suffered amajor malfunction and is rapidly falling toward Earth. Eager skywatchers can observethe satellite in orbit as it flies overhead.

If left onits own, at least 50 percent of the satellite?s mass would survive reentry —including a tank full of toxic hydrazine fuel — prompting concerns that debriscould endanger the public should it fall on a populated area, Cartwright said.

The windowin which to destroy the satellite just before it reenters the Earth?s atmosphere — andstill limit the risk of secondary debris endangering unmanned spacecraft, theInternational Space Station (ISS) and the public on the ground — closes justdays after Atlantis? planned Feb. 20 landing.

NASA traditionallyonly targets the Shuttle Landing Facility runway at its KSC for the first landingday of a shuttle mission because it cuts at least a week and $1.7 million fromthe spacecraft?s turnaround costs for subsequent flights.

?We?veanalyzed it and it has negligible impact or additional risk to the spacestation,? said Kirk Shireman, NASA?s deputy space station program manager.

Shiremansaid that there are no current plans to have the space station crew, which iscommanded by Americanastronaut Peggy Whitson, attempt to observe or photograph the satellite?sdestruction from orbit. ?

?We?re notconcerned at all about any risk to the space station an dat this time have noplans for any operations in conjunction,? Shireman said.

Commandedby veteran shuttle astronaut Stephen Frick, Atlantis? seven-astronaut crew isin the midst of a 13-day mission to deliver the European Space Agency?sColumbus lab and a new crewmember to the ISS.

The shuttleastronauts launched aboard Atlantis on Feb. 7. ?