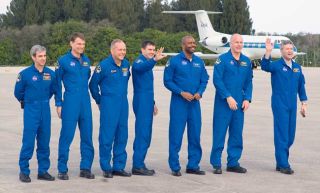 CAPECANAVERAL, Fla. ? Tomorrow's launch of the space shuttle Atlantis has a 70 percentchance of getting rained out, NASA mission managers said this morning.

A coldfront moving across the U.S. this week unleashed dozens of tornadoes in the mid-South late Tuesday evening and continues to churn up thunderstorms. NASAdoesn't expect a twister to botch their 2:45 p.m. EST (1945 GMT) launchopportunity on Thursday, but the threat of a thunderstorm, showers or thickcloud cover has lowered launch expectations from 40 percent to 30 percent.

"Wealways hope for that," Spaulding said. "As we all know, weather in Florida changes very rapidly. Things may improve or improve enough to get us the ability toget off the ground. The worst case would be if ?? we'd have to try a differentday."

Showersconcern NASA because rain can damage the thermal protection shield of Atlantisduring its high-speed launch. Heavy cloud cover is also problematic, Winters noted,because visibility of the shuttle as it launches can be obscured and pose athreat to public safety.

Shouldunfavorable conditions push the agency to scrub its launch in the early tomorrowmorning, mission managers will aim for a 2:19 p.m. EST (1919 GMT) attempt onFriday. The chance of getting Atlantis into orbit then has also been lowered,from 80 percent to 60 percent, because of the potential for lingering rainshowers.

As NASAcrosses its fingers for a break in bad weather tomorrow, technicians continue toprepare Atlantis for its big moment.

The 100-tonorbiter's power-producing fuel cells have been filled and will be activatedlater this evening, following the retraction of launch Pad 39A's 13-storyrotating service structure (RSS). The moveable scaffolding helps technicians serviceand inspect vital areas of the space shuttle after it is rolled out to thelaunch pad. Once the RSS is rolled back, it will reveal the freshly preparedAtlantis spacecraft.

The sevenastronauts of the STS-122 mission have also been making final preparations fortheir space shot.