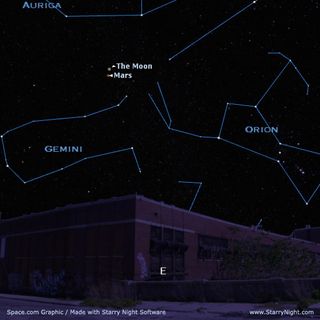 Look east on the evening of December 23 to see the Moon and Mars so close together that you'll be able to see them in the same pair of binoculars.

If skies are clear in your area on Sunday night, Dec. 23, you'llbe able to partake in a rather unusual sight as the full moon appears to glidevery closely above the planet Mars.

Mars, which made its closestapproach to the Earth on Dec. 18, will be only hours from a Christmas Eveopposition with the sun and is now shining prominently with a brightyellow-orange glow.

And if you're favorably positioned in certain parts of the PacificNorthwest, western Canada, or Alaska, you'll actually see the moon occult(hide) Mars for a short time as the pair sits low above the east-northeasthorizon.

A similar encounter in 2003 created a great photoopportunity.

The farther north and west you are located, the closertogether the moon and Mars will appear; the time of closest approach will comeearlier in the evening as you head west. Those along the U.S. East Coast willget their best views during mid-evening between about 8:40 and 9:10 p.m.EST. For skywatchers along the West Coast, closest approach comes asevening twilight fades between about 5:30 and 5:45 p.m. PST.

It is rather ironic that Mars and this upcoming full moonwill appear side-by-side, considering that several months ago, an Internet hoaxregarding Mars and the moon unfortunately received wide circulation. Thisinfamous e-mail message duped countless people into believing that there wouldbe "two full moons" shining side by side in the sky, implying thatMars would seem to loom as large as the moon itself. As preposterous as thishyperbole sounded, many nonetheless made elaborate plans to be outside on theappointed night, fully expecting to see Mars swollen to an incredibly largesize. Of course, it was not to be.

Now keep this in mind: With this upcoming pre-Christmastableau, Mars will be only 1/127 as large as the disk of the moon. So to thenaked eye it will appear not as a disk, but as a non-twinkling, albeitbrilliant "star."

No doubt many last-minute holiday shoppers who are out onSunday evening might do a double-take should they cast their gaze up toward thewinter's first full moon and wonder, "What is that star that happens to behovering below it?" But unless they're looking through a high-powereyepiece of a telescope nobody should expect to see Mars even remotelyresembling a moon-sized object! Something for all of you to keep in mind nextsummer, if that insipid Martian hoax gets recycled yet again.

Below are details of how this event will appear for severaldifferent regions of North America. Note that 10 degrees in the sky is aboutequal to the width of your fist on an outstretched arm.

For places in the Eastern time zone, the moon and Mars willappear separated by roughly 2 to 3-degrees as they rise from east-northeast atdusk.

Mars will be situated below and to the left of the moon. Noticethat moon will appear to approach Mars as the evening progresses by its owndiameter each hour. By about 7:00 p.m., the moon will seem to be sittingdirectly above Mars and an hour later, it will have shifted to the upper leftof Mars. They will appear closest together at around 8:55 p.m. — give or takeabout 15-minutes depending on your exact location. Mars will appear to get asclose as about 21 arc-minutes relative to the moon's lower right limb ...that's about two-thirds of the apparent width of the moon.

For places in the Central time zone, Mars and the moon willbe separated by only about a couple of degrees (or even slightly less) as theyemerge from the east-northeast horizon at dusk.

Soon after 6:00 p.m., the moon will be sitting directlyabove Mars. At about 7:40 p.m. — give or take about 10 minutes — they'll appearclosest, with Mars situated about 16 arc minutes (about half the apparent widthof the moon) below and to the right of the moon's edge.

The moon then pulls away from Mars at its own diameter eachhour for the rest of the night.

From the Mountain time zone, the moon will appear seem to besitting less than its own apparent width, directly above Mars at 5:45 p.m. Lessthan an hour later at around 6:35 p.m. — give or take five minutes — you'll seeMars sitting only about 9-arc minutes — or less than one-third of the moon's apparentwidth — from its lower right edge.

From California, the moon will hover just above Mars at 5:00p.m. PST, but the pair will be very low to the east-northeast horizon.

From Los Angeles, closest approach comes at 5:32 p.m. — only8 arc minutes separate Mars from the moon's lower right limb. They'll be onlyhalf as close as this (about one-eighth of the moon's apparent diameter) asseen from San Francisco at 5:37 p.m.

Traveling farther north (toward Oregon) places you closer tothe southern limit of where Mars will actually disappear behind the moon'sright-hand edge.

In the occultation zone

If you live anywhere north of a line that will run southwestto northeast from near Newport, Oregon to Eastport, Idaho, and continuing on uptoward western Hudson Bay, you will see the moon cross in front of Mars andtemporarily eclipse it.

This includes the northwestern part of Oregon, much of Washington state (except the southeast) and a small sliver of northernmost Idaho. Also withinthe viewing zone is a large part of western Canada, as well as the entire stateof Alaska. Some notable cities are within the zone, including Portland, Seattle, Vancouver, Edmonton and Anchorage. From Portland, for instance, Mars will behidden from 5:46 to 5:50 p.m. PST.

The glare from the brilliant moon will make thedisappearance and reappearance all but impossible to see with the naked-eyealone; binoculars or better yet, a telescope should be used as Mars graduallycloses in on the moon and later moves away from it.

A map of the visibility zone along with a schedule fordozens of cities in North America, as well as Europe and Asia (where Mars willbe occulted during the predawn hours of Dec. 24) can be accessed here.