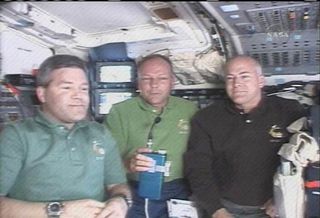 HOUSTON — Ashuttle astronaut pulled from a spacewalk earlier this week is feeling better ashe and his crewmates continue what they called an ?amazing? construction flightto the International Space Station (ISS).

Germanastronaut Hans Schlegel declined to go into the details of his malady, but toldreporters that he is back at full strength after a medical issue prevented himfrom taking part in aMonday spacewalk to help deliver the European Space Agency?s (ESA) Columbuslaboratory to the ISS. ??

?I?m doingvery fine,? Schlegel said via a space-to-ground video link after he andcrewmates openedthe new lab today. ?I worked all day today on Columbus and then to preparemy [spacewalk] with Rex Walheim tomorrow.?

Schlegeland Walheim will pay a maintenance call on the space station?s cooling systemWednesday when they replace an empty nitrogen tank during their mission?ssecond spacewalk. Mission managers delayed the flight?s first spacewalk,originally planned for Sunday, by one day to swap Schlegel with fellowspacewalker Stanley Love.

But whilehe was personally disappointed in staying inside the NASA?s Atlantis orbiter,Schlegel said he supported the call and was excited to assist the spacewalkers frominside the spacecraft alongside shuttle pilot Alan Poindexter.

?Nobodycould have been happier than me when we finished,? Schlegel said. ?That?s all Iwant to say because medical issues are private.?

?The viewof the Earth is probably the most incredible personal experience that peoplehave,? Frick said from the flight deck of Atlantis. ?It?s just an amazing experienceand we get to do it for 11 or 12 days.?

Atlantis?seven-astronaut crew ferried French astronaut Leopold Eyharts of the ESA to theISS, where he joined the station?s Expedition 16 crew and will oversee the commissionof Columbus over the next month. Eyharts replaced NASA astronaut Dan Tani, whowill return to Earth with the STS-122 crew when they land on Feb. 19.

Poindexter,who like Love and crewmate Leland Melvin is making his first spaceflight onSTS-122, said the space station is a beautiful place to work, even if it isonly 57 percent complete.